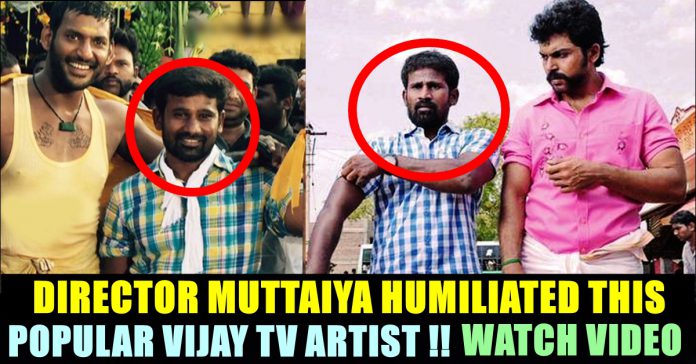 TV actor Gemini Mani who is known for appearing in serials of Vijay Television such as “Office”, “Eeramana Rojave”, appeared in an interaction with a youtube channel to share about his acting journey. In the 27 minute long interaction, Mani shared about his journey in film industry and Television industry.

Gemini Mani who was working with Gemini circuits as a driver, says that he worked for them as a production manager too. He who identifies himself as an ardent fan of actor Ajith Kumar, revealed how Ajith reacted on seeing the tattoo in Mani’s hand in which he imprinted Ajith’s name. The “Billa” actor asked Mani to remove it by taking medication and advised him to look after his family.

“Did I do anything for you ??” asked Ajith to Mani and questioned him why he did it. “It won’t fade away, right ?” Ajith kumar further asked who also asked what is the use of the tattoo. Ajith kumar also asked Mani to “delete” the tattoo by taking medications. After that Mani explained about the difficulties in entering film industry amidst the ongoing politics.

He who said that acting in TV industry has many advantages than acting in films, narrated the viewers about the humiliation he went through during one of a shoot. He explained how a cinematographer blamed him for a mistake he committed in a shooting spot. The cinematographer degraded Mani and said that he came to acting without knowing how to behave for a close up shot. He further questioned Mani about his technical knowledge in filmmaking when he (Mani) confronted which made the serial actor to make a short film “Kaaka Kuruvi Kalyanam”.

After that, Mani volunteered to reveal about another humiliation he went through for trying to act in Director Muttiah’s direction who is known for making films such as “Kutti Puli, “Marudhu”, Devarattam”, Komban”. Mani says that he liked the filmmaker very much and wished act in his directorial. “In Paayum puli audio launch, I asked cinematographer Vel Raj sir to recommend me to Muttiah sir as I wished to act in his film “Marudhu”. When Velraj Sir recommended me, Muttiah sir asked me to go to his office. He also gave me hope by saying that he can recognise my face from the film “Sandiyar”. After getting his assistant director’s contact number, I reached the office thinking that I would get an opportunity to act in his film” said Mani.

“After reaching the office, I came to know that he (Muttiah) went for lunch. I called his assistant director and heard Muttiah sir asking him to make me give my photo and leave. I felt bad for not meeting him in person. While leaving after giving my photos, I saw Muttiah sir and his assistant coming after eating. I had my sigh of relief as I got the opportunity to meet him in person” said Mani who went on to add how the filmmaker treated him.

When Mani approached Muttiah and wished him, the director reportedly said “Hello . . Photo Kuduthiyaa . . Poitte Irukanum. Paakra edathla elam pesitruka kudathu, Poya Velila” ( If you gave your photo, leave immediately. There is no business for you to talk with me wherever you see. Get lost)

“I got shocked and couldn’t discover what I did wrong. That is when I realized that there is no value for recommendation in film industry, no matter how influential the person is. I left the place. After that I met him in few places and would wish but he would look away. I am not sure if it is due to guilt or he avoided me” said Mani who went on explain how his short film “Kaaka Kuruvi kalyanam” and Muttiah’s “Maruthu” collided in a DI studio owned by his former chief.