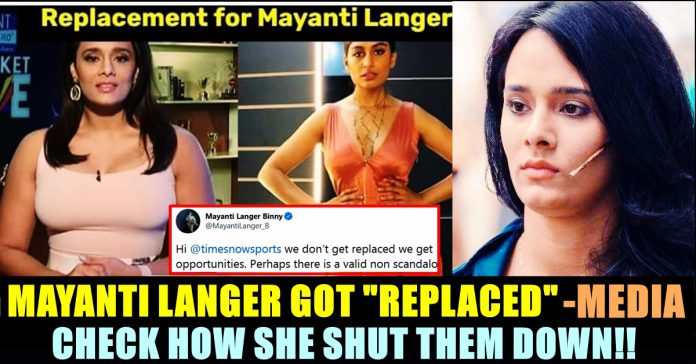 Those who are keenly following IPL for years would have known definitely known about Mayanti Langer, a popular host who appears before the start of every match. She enjoys a separate fanbase in India for the way she hosts the programs to entertain the audience. As the 13th edition of IPL is going to get inaugurated from today, a report surfaced saying that the latter is no longer a host of IPL 13 only to leave the fans in a shocked state.

Mayanti Langer, wife of former Indian cricketer Stuart Binny, was part of the anchoring panel in past two IPL seasons and has also covered numerous ICC events. Her absence in the upcoming season has left the fans dejected.

Meanwhile, Times now news updated about her absence in their portal with a headline saying that the 35 year old host got replaced by another female anchor. “Mayanti Langer to miss IPL 2020, confirms broadcaster Star Sports ; replacement announced” read the headline to Times now news.

On seeing the piece, the anchor who is pretty much active in social media platforms with 1.7 Lakh followers, made a reply asking them to reach out before making speculations. She said that anchors won’t get replaced but get opportunities. She also added that there might be a valid, non-scandalous, non-controversial reason.

“Hi @timesnowsports we don’t get replaced we get opportunities. Perhaps there is a valid non scandalous, non controversial reason. Care to reach out for a comment rather than speculating?” Mayanti said in her reply.

Check out her reply here :

Hi @timesnowsports we don’t get replaced we get opportunities. Perhaps there is a valid non scandalous, non controversial reason. Care to reach out for a comment rather than speculating? https://t.co/w3FxxRNr2H

Followed by this, to clear the air, Mayanti disclosed that she gave birth to a baby just 6 weeks ago, due to which she couldn’t take part in the IPL season.

“So quite a few have reached out, and many are speculating. For the past five years, my family at Star Sports has given me the incredible privilege of fronting their most high profile events. In fact they supported me when I needed them the most, when I was pregnant with my son.” Mayanti wrote in her note.

“They made several adjustments to ensure that I was comfortable hosting till I was 20 weeks/5 months pregnant and would have continued going so had IPL 20 gone on as scheduled. Stuart and I were blessed by the birth of our baby boy almost six weeks ago. Life has changed for the better,” she added.

Let us congratulate the couple for giving birth to a baby boy !!