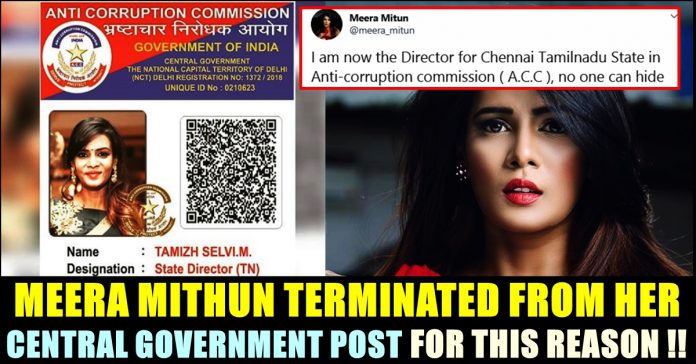 Meera Mithun, one of the most controversial Bigg Boss contestant, recently surprised her followers by saying that got appointed as the Director for Tamilnadu State in Anti-corruption commission. This announcement from the aspiring actress raised the eyebrows of her followers and many questioned how she got that post. (Read : Meera Mithun Appointed As Central Government Officer !!)

Now, the model has complained that she has been removed from that post because of a criminal who harassed her for past one year. After the end of Bigg Boss season-3, Meera Mithun, one of a female contestant is very much busy in social media platforms, especially in Twitter. Being one of the most controversial contestant of the reality game show, Meera Mithun accused almost every housemate who participated along with her in it. To an extent, she even accused Kamal Haasan, the host of Bigg Boss Tamil.

In her post about her termination, Meera Mithun wrote “Yesterday I noticed the criminal who is harassing me for one year openly said he is going to release termination letter of mine. Today a letter is released in an online press.I didn’t get any letter from my national chairman yet Howz this possible ?Am Surprised!”

Yesterday I noticed the criminal who is harassing me for one year openly said he is going to release termination letter of mine. Today a letter is released in an online press.I didn't get any letter from my national chairman yet Howz this possible ?Am Surprised! @DeccanChronicle pic.twitter.com/3nWVv5MAMf

In the picture Meera Mithun attached, we can see Anti corruption commission stating the reasons regarding why they are terminating her from the post. One of the main two reasons stated is Meera Mithun didn’t provide Police clearance certificate to the commission in order to get the posting. Another reason is many people from public questioned the commission on the FIR against her. The decision was taken during the meeting that took place on 3rd of December.

In the notice, the commission made it clear that Police clearance certificate is one of the main part of recruitment procedure. They also informed Meera Mithun that the decision was not made considering her being the Social media icon. Further they Meera Mithun to not represent Anti corruption commission or conduct meetings regarding the same in future.

Check out the notice sent to Meera Mithun here :

Earlier, Meera Mithun while sharing her identity card of being the director of Tamilnadu Anti-corruption commision wrote “Odavum Mudiyathu Oliyavum Mudiyathu” Check out her post regarding that here :

Corruption, the biggest reason for the downfall of most empires and civilization. Some group of people can tolerate corruption as long as their leader champion their religion or race, some will tolerate bribery as long as they champion their own pockets. I’ve lived long enough shouting anti-corruption slogan against the government having no problem bribing a police officer and vote for a leader of their choice as long as these leaders championed their own race. But here comes the twist and buckle up everyone iam now the Director for Chennai Tamilnadu State in Anti-corruption commission ( A.C.C )and no one can hide hereafter and iam watching. To say in Tamil odavum mudiyathu oliyavum mudiyathu. Join hands with me for a corruption free State.

What do you think on this termination of the actress ?? Comment your views below !!