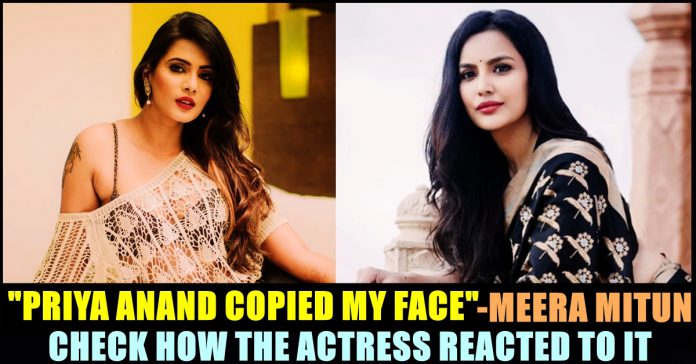 Controversial personality Meera Mitun said that actress Priya Anand copied her face and the actress reacted to the video through her official Instagram account. She shared the story shared by Ahmad Meeran and made her 1 million Instagram followers to know about the statement of Meera Mitun, former Bigg Boss participant. Meera also said that even Nayanthara, Trisha and Priya Bhavani Shankar copied her face. In previous occasions, She also accused Bollywood actress Priyanka Chopra for copying her style.

If you are aware of Bigg Boss show’s third season in Tamil, you must have known about Meera Mithun , one of the most talked about participants of it. One of the highly controversial episode of the season is undoubtedly the one in which Meera Mithun accused Director Cheran of physical harassment.

After accusing Director Cheran of physically assaulting her, Ulaganayagan Kamal haasan of nepotism, Superstar Rajinikanth of promoting himself during COVID 19 pandemic, Trisha and Nayanthara for copying her style, actress and model Meera Mitun, verbally attacked Vijay and Suriya as well. Her controversial videos and tweets against the top tier actors made ace director Bharathi Raja to release a press note.

Now, in her youtube channel, Meera Mitun said that actresses such as Nayanthara, Trisha, Priya Bhavani Shankar and Priya Anand copied her face. Sharing the video in his story, Ahmad Meeran who is known for trolling Meera Mitun, shared the video in his Instagram handle and tagged actress Priya Anand. “You didn’t tell me this, Wow I’m a proud friend now” he sarcastically wrote by tagging the “Vamanan” actress.

Check out his story below :

Priya Anand shared the video in her official Instagram handle by adding a toddler’s GIF and made her followers to know about what Meera Mitun said. Here’s the screen shot of her story :

Meera Mitun gained widespread fame after participating in the Kamal Haasan hosting Bigg Boss show. In the show, she accused veteran director Cheran of physically assaulting her but Kamal Haasan streamed a “Kurumpadam” in the weekend and made Meera wrong. He advised her not to make false accusations as it will weaken the authenticity of real accusations.

Priya Anand who rose to fame among Tamil audience after acting in Tamil films “Vaamanan”, “Ethir Neechal”, “Vanakkam Chennai” is enjoying a huge fan base in social media platforms. She is pretty much interactive with her followers in the photo/video posting social media platforms. On the work front, the actress who was last seen in the remake of Telugu blockbuster “Arjun Reddy”, is expected to be seen in “Mirchi” Shiva’s “Sumo, a Kannada film named “James”, “RDX” and in “Anthagan”, remake of Hindi blockbuster “Andhadhun”.