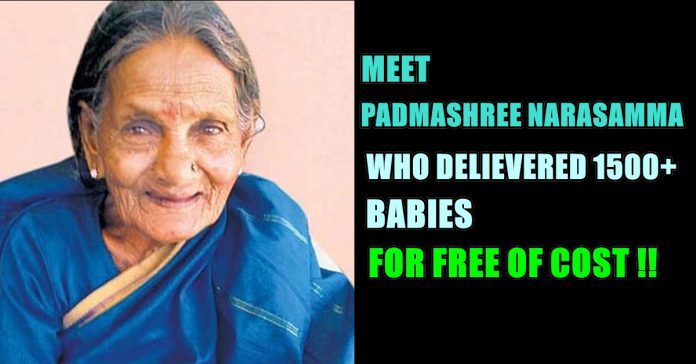 Sulagitti Narasamma is an Indian midwife from Krishnapura, Karnataka. She has been awarded with multiple honours for performing more than 15,000 traditional deliveries free of charge over a 70-year period of service in deprived regions of Karnataka with no medical facilities.

Her work has been honored with the National Citizen’s award of India in 2012 and the country’s fourth highest civilian award, the Padma Shri in 2018. Narasamma was only 20 years old when she helped bring the first baby into the world which was in 1940. This child was her aunt’s. And even as an overwhelmed Narasamma took on the role of a midwife for the very first time, little did she know that what she would one day win a national honour for it.

‘Sulagatti’ Narasamma has been delivering babies for 70 years in backward areas of Tumkur district in Karnataka. And her life-long services to women whose children she helped deliver without taking a penny were finally recognised – she was honoured with a Padma Shri.

TNM spoke to Sriram Pavagada, one of Narasamma’s 12 children. He says that Narasamma would always observe her grandmother Margamma deliver babies, when she was a child.

“Margamma herself was locally famous in Tumkur for delivering babies around 70 years ago. When she delivered her aunt’s child – her first – her aunt remarked ‘Narsu, your hands are special’. That was the start,” Sriram narrates. Encouraged by her grandmother and aunt, Narasamma began delivering babies and soon became the go-to person in Pavagada for pregnant women.

Narsamma delivered babies free of cost at a time hospitals and roads were unheard of in Pavagada. It earned the moniker ‘Sulagatti’ Narasamma – sulagatti in Kannada means ‘delivery work’.

“Even now, though there are hospitals, many people don’t like to go there. Instead, they prefer Narsamma since they know her,” says Sriram. People’s immense faith in Narasamma and her ways has seen her deliver over 1,500 babies in the last 77 years. And until a few years ago, she did this apart from agricultural work. “If you ask her, she will say I don’t have a count since she has been doing it all her life,” Sriram says with fondness.

Midwives were an integral part of rural life in Tumkur until technological innovations in medicine reached there. The introduction of hospitals contributed to the gradual fall in the prominence of women who help during childbirth. The Padma Shri award has brought Narasamma’s work into limelight once again, and her son hopes that there is a greater interest in taking her work forward.

Narasamma’s work is now being continued by close to 180 pupils who learnt the traditional way of delivering babies from her. This includes her youngest daughter Jayamma who is now an experienced midwife.

Though he doesn’t remember when, Sriram says that his mother has also been conferred an honorary doctorate by Tumkur University.