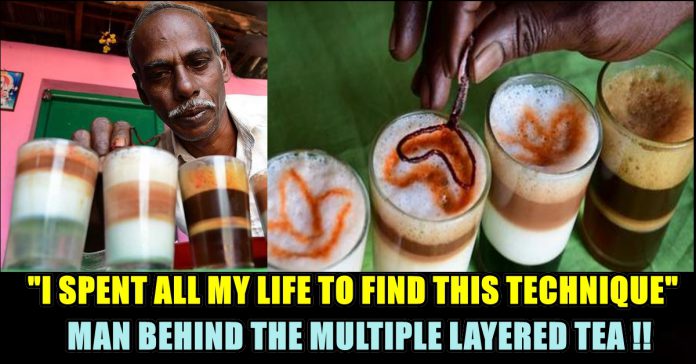 My father was a weaver. He brought us to Coimbatore from Salem when I was ten years old. I never went to school. I joined work in a tea shop; did small tasks such as washing tea glasses. I started making tea when I was 15. There have been days when I made up to 1000 cups of tea a day…But people have been drinking the same kind of tea for years. I wanted to give them something different.

Tea ‘master’ B Manickam is frothing up milk in his two-roomed home when we walk in. His house is on a hill called Kanuvai in Coimbatore , and he has elephants for neighbours, although they keep to themselves. “They don’t come to this side of the hill,” he says, pouring steaming hot milk from an aluminium jug into a wide-mouthed vessel. The 57-year-old is the brain behind ‘layered’ tea, and is a latte artist in his own, rough-edged way. 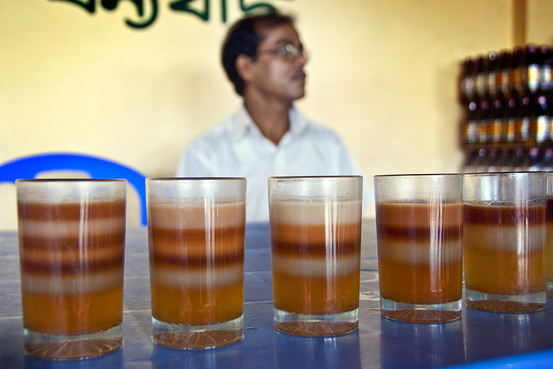 “I can arrange up to five different layers of beverages, inside a single tea glass. The layers are white, pink, deep brown, light brown and transparent and are made of milk, tea decoction, coffee decoction, Boost and water. They don’t mix. This is because, I use a different consistency for each layer. The tea is edible and is tasty too. You can drink my three-layered tea after simply mixing the contents with a spoon.

“I create the layers using decoctions of varying consistencies,” explains the 57-year-old, settling down on stone steps overlooking a flight of steps leading downhill.

“Froth plays an important role in getting it right,” he adds. Manickam grew up in tea shops. “I ran away from home when I was 16 and worked in several tea shops. I assisted tea masters, learned how they worked, and often slept at the shops.” Manickam came up with the innovation some 15 years ago. “I wanted to offer something unique for customers,” he says. Since he spent most part of his life at tea shops, he spent all his spare time trying out various techniques, and finally arrived at ‘layered’ tea. “I enjoy doing this,” he says. “Tea has given me a life and I’m happy that I’m able to create something new out of it.”

Manickam has worked at several tea shops in Coimbatore, but has never made enough money to start his own. He currently ferries tea to workshops on his moped, making around 500 cups a day. His innovation hasn’t gotten him anywhere. What he’s doing is art, we tell him, and he waves his hand, saying, “I make it for people  who ask for it, otherwise, it’s regular tea that brings in my income.”

Originally published in The Hindu