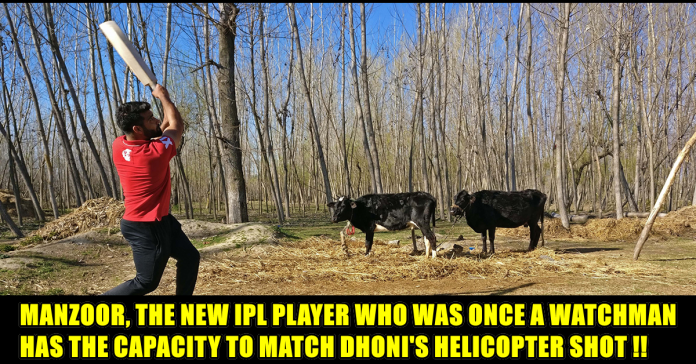 A nondescript and remote village called Shigan Pora in this Kashmir district is celebrating the selection of local cricketing talent, 24-year-old Manzoor Ahmad Dar, to the prestigious Indian Premier League (IPL). He is the second Kashmiri to achieve the feat.

Nicknamed Pandav, Dar was picked up by Kings XI Punjab “It is a rare moment of my life. I am overwhelmed,” says the cricketer. The crowd around him isn’t a new phenomenon. “Politicians would come here as dignitaries during local tournaments and feel left out,” says Dar’s uncle, Ghulam Rasool Wani. “Everyone was only interested in Manzoor. Over time, they learnt that the best way to draw people in was to invite Manzoor to sit down with them.”

However, other J&K cricketers were given a miss. Parvez Rasool, who was capped wasn’t even part of the auction, while Umar Nazir didn’t fetch any bids. Interestingly, Dar is called Mr 100 metre sixer. His coach Abdul Qayoom had told News 18: “He is Mr 100 metre sixer man. He gives the ball a real thump. Last year in a match with Punjab, he hit a few sixes that were 100 metres plus,” recalls Qayoom.

His coach explained that his 6 feet two inches, 84 kg ward could tilt the game in the space of 12 to 15 deliveries. But life was not always so rosy for the 24-year-old. There was a time he had to work as a watchman to support his family. He was the eldest of 8 siblings. He had to quit studies in order to bring in money, but it did not diminish his passion for the game. Manzoor worked in the night and practiced during the day.

He is now reaping the benefits. Not only is Manzoor in the IPL, he is also appearing for his school finals.

Manzoor is trying to perfect MS Dhoni’s helicopter shot and hopefully we shall see hi unleash it. All the best Manzoor! You have a long way to go, but you are certainly on the right track.