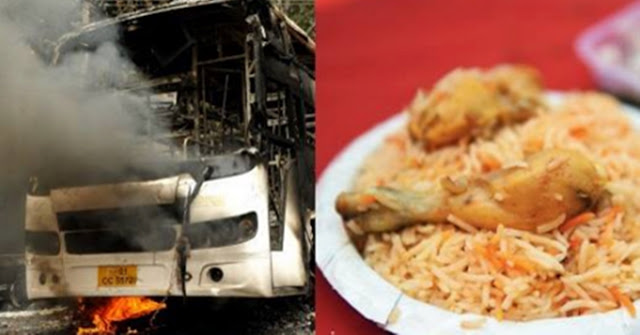 A 22-year-old woman suspected to have instigated the arson attack on 42 buses of a Tamil Nadu-based operator in Bengaluru last week was allegedly offered Rs 100 and a plate of biriyani to join the protest over cauvery water sharing.

C Bhagya is one of 11 people arrested for the September 12 attack. The suspects have been accused of dousing the crew of the KPN fleet with diesel and threatening to burn them. It was on account of CCTV footage from the yard where the buses were parked, as well as mobile phone videos filmed by the crew, that police suspected Bhagya to be the agent provocateur.

However, Bhagya’s mother Yellamma has told the media that her daughter was offered Rs 100 and a plate of mutton biryani by “friends” to join the protests. Bhagya stays with her parents in Girinagar, close to the KPN garage, and is a daily wager. “Bhagya had just returned home around noon (on September 12) when some men known to her came over and asked her to join the protests.They promised to give her biryani and Rs 100 at the end of the day,” Yellamma said.

Police sources said the footage from the arson site also shows other women, but it is not clear if they played an active role in the vandalism. Bhagya is the only woman among the 400-odd people arrested in connection with the September 12 violence in Bengaluru. She is currently in police custody for further questioning.

A senior police officer said it was not yet clear if Bhagya was leading the mob. “As of now, we can say she was one of the arsonists,” the officer added.