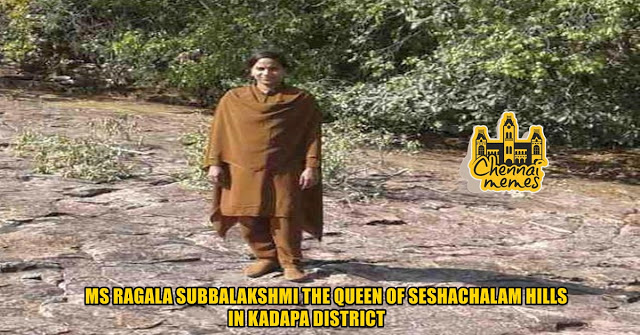 Here’s an incredible saga of a woman forester in the Seshachalam biosphere, as she has to crisscross the districts of Kadapa and Chittoor to reach her highly inaccessible Moghilipenta beat spread over 20,000 acres.
The Moghilipenta beat is located at an elevated plateau in Kadapa district, surrounded by a zigzag of the Seshachalam hill ranges, currently the hotbed of red sanders smuggling. Subbalakshmi, 25, Forest Beat Officer (FBO) attached to the Balupalle range of Railway Kodur division in Kadapa district, is the sole guardian of this beat.
She has to travel 60 km by road from Balupalle to Tirupati and then to the Tirumala hills in Chittoor district.
After reaching Tirumala, she has to trek 35 km deep in the forests towards Kadapa district, traversing valleys, slopes and ridges. It would take a minimum of two days to accomplish the journey.
During the last couple of years, the woman FBO has been missing her companion, an Assistant Beat Officer (ABO), which post fell vacant. This makes her a lonely soul in a vast jungle, completely unarmed, taking each step amid a plethora of dangers, which could be red sanders smugglers or wild animals.
As it is humanly impossible to carry out her duties as an FBO, the superior officers are kind to her, not insisting on her performing her beat daily.
The Divisional Forest Officer (Tirupati wildlife), T.V. Subba Reddy, told The Hindu that the woman was a dynamic beat officer. “During the British Raj, there was a motorable track between Balupalle and Moghilipenta plateau in Kadapa district.”
SOURCE