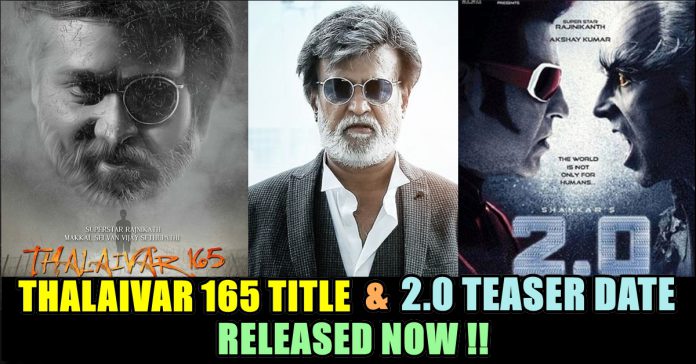 One of the most expected and biggest projects under production is Superstar Rajinikanth’s next with director Karthik Subbaraj. The film is produced by Sun Pictures and has music by Anirudh Ravichander.

The cast includes the likes of Vijay Sethupathi, Nawazuddin Siddiqui, Trisha, Simran, Bobby Simhaa, Ramadoss and many others.

Today, we got the news that the first look motion poster along with the title of the film will be released at 6 pm. This got all the fans extremely excited.

Here’s a video posted on Twitter by Sun Pictures that records the cast and crew of Thalaivar 165, thinking out loud about what the title could be. Watch Anirudh and other cast members react here:

As said the title released now and it is a blinder :

As it is in this way, Director Shankar announced the releaase date in 2.0 teaser which became a double treat for Rajini fans. In the poster Shankar released it denotes that the teaser to be launched on 13th of this month which is 5 days away.

Rajini fans going crazy on these announcements. What do you think on these updates , let us know by commenting below !!