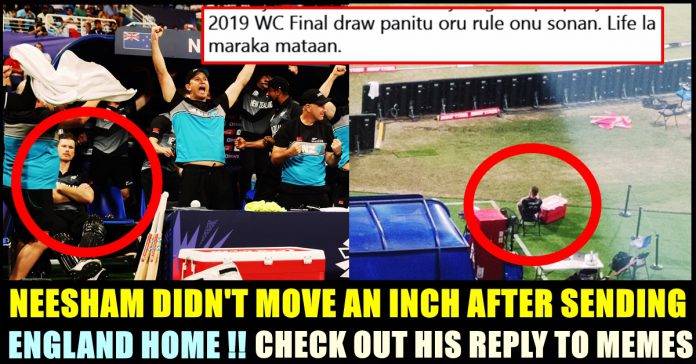 The way New Zealand all rounder Jimmy Neesham reacted when his team wildly celebrated after eliminating team England in the ongoing world cup tournament, caught the attention of Internet and caused several memes and posts. The cricketer who smashed a quick fire 20 plus which helped the team to win the match, didn’t move an inch and sat mum and also got captured by the photographers along with his enthusiastic team. Reacting to a post of a cricket page, Neesham said that he thinks that the job isn’t finished yet and tweet became his highest “liked” tweet ever.

No celebration and No reaction on Jimmy Neesham's face, when New Zealand won the Semifinal match against England. #NZvENG pic.twitter.com/fYzE6JTJ3x

England Challenged New Zealand to score 167 runs in 20 overs after batting in the first innings and the Black Caps completed the challenge successfully with 1 over to spare. Jimmy played an important role when his team needed him the most. New Zealand were 107 for 4 and needed 60 runs in just 29 balls when Neesham walked in to bat. The left hander took Chris Jordan apart in the 17th over. He managed to score 27 runs in just 11 balls to take all the pressure off Mitchell who was playing well but struggling a bit to find maximums. Taking the game away from England, Neesham got out to Adil Rashid.

Reacting to a post of a cricket page, Jimmy Neesham said “Job finished? I don’t think so” in a tweet. The tweet became his highest liked tweet ever. With 67k plus likes, nearly 6k people shared his tweet with thousands of others reacting to it.

Though you don't understand the lavished
Language, emotions will be enough. A small meme for you @JimmyNeesh 😀 pic.twitter.com/tn8UiefN1L

Love you mannn, I've run out of superlatives to praise you. You're the greatest 🐐 pic.twitter.com/baTx0QM3bk

He is still sitting here only …. Every other team members sleeping in hotel …. But not him pic.twitter.com/jgYhOmgX1O