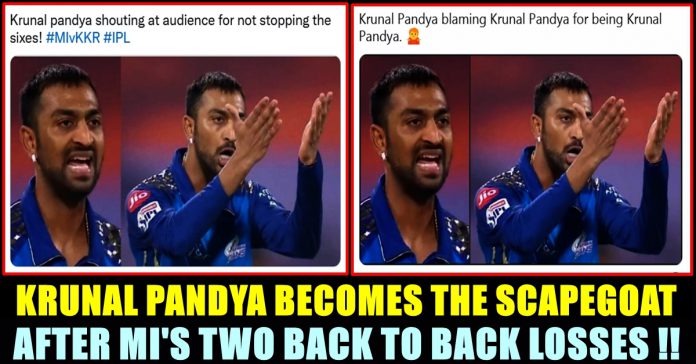 With back to back loses faced to the Sachin-mentored team in the ongoing Indian Premier League tournament, fans started playing the blame game and this time, Krunal Pandya has been chosen as the scape goat. Memes and trolls targeting the all rounder are flooding the feeds of the social media platforms, though he didn’t contribute to the loss completely in both the matches.

Fans of the team who stated that the absence of Rohit Sharma as captain caused the loss against Chennai Super Kings, has been claiming that the absence of all rounder Hardik Pandya as the reason for the loss against Kolkata Knight Riders. However, trolls targeting Krunal are constantly flowing to an extend hashtag “Krunal Pandya” started trending in the micro blogging social media site.

In the first match against Chennai, Krunal Pandya conceded 27 runs in 2 overs which took the momentum away from his team as the yellow team was struggling by losing 4 wickets for 24 runs. He also managed to score only 4 runs in the 5 balls he faced in that match. In the match against Kolkata, Krunal bowled 3 overs and conceded 25 runs with an economy of 8.3. He also didn’t do much in the batting.

Fans of Mumbai Indians who were desperately searching for a reason to blame, started trolling Krunal in every possible way they could. They also started questioning his place in playing 11 and demanded the team management to replace him with any other reasonable player. “Divided by teams. United by Krunal Pandya hate” said a twitter user in his tweet whereas many others made fun of him for blaming others. Many even expressed their wish of Sachin’s son Arjun Tendulkar replacing him.

Krunal Pandya's post getting out strategy is to look for the closest thing he can blame it on.

He is Motivating Youth..

"Don't give up. If Krunal Pandya can be a cricketer then You could become ANYTHING You want." 🔥

Krunal Pandya is the best all rounder with unique skill.
Bowls like a Batter.
Bats like a Bowler.😭😭#KKRvsMI #krunalpandya

Krunal Pandya scolding Venkatesh iyer for hitting him out of the ground #MIvKKR pic.twitter.com/UiAjgE6zWX

Krunal Pandya yelling at air resistance for not slowing the ball down after he's been hit for a 6.#KKRvMI pic.twitter.com/ySGUQRI5Cc

Nothing Just krunal pandya blaming his parents for his existence pic.twitter.com/jxbwcQBHvO

Krunal pandya shouting at audience for not stopping the sixes! #MIvKKR #IPL pic.twitter.com/j7Wo5HcCc8