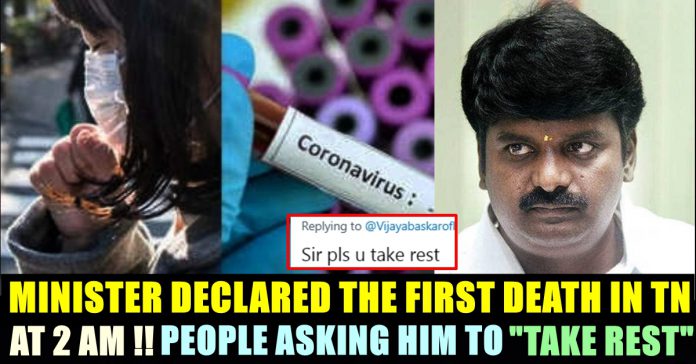 Tamilnadu recorded its first death due to the deadly COVID 19 during the wee hours of March 25. Minister Vijaya Bhaskar took twitter to declare the death by providing the details of the deceased. Meanwhile, followers of the minister in Twitter requested him to take some rest as tweets are constantly surfacing in his timeline regarding the updates of his visits to the hospitals and state of patients.

The 54 year old man who tested positive on 23rd of March was undergoing treatment at Rajaji Government Hospital, Madurai, died. Health Minister Vijaya Bhaskar posted about it in his official twitter account at 2.02 a.m. “Despite our best efforts, the #COVID19 +ve Pt at MDU, #RajajiHospital, passed away few minutes back.He had medical history of prolonged illness with steroid dependent COPD, uncontrolled Diabetes with Hypertension.” his tweet read.

During a press meet on Tuesday night, Vijayabhaskar clarified that though the patient did not have a travel history to an affected nation, it has been proved through his contact history that he had come in contact with some Thailand nationals, who were on Tour in the State. Two of them had tested positive and have been admitted to IRT, Perundurai.

Meanwhile, the tweet of the minister went viral with various kind of reactions. Few questioned how he died after testing positive but many of them requested the Minister to take some rest. “Sir you got to rest sometime, you’ve been at ur best for the past few days. Get some sleep” wrote one of a twitter user.

Sir you got to rest sometime, you’ve been at ur best for the past few days. Get some sleep plz to guide us sail through this rough tide. Once again hats off to all ur efforts sir. Massive respect

Your self-less service for the nation is inspiring.

May his rest in peace! Your efforts are much appreciated. Sure we’ll come up from this deadly virus. You are visiting many hospitals everyday, plz be safe. Now TN needs a minister like you.

However few people alleged that those tweets are being posted by his social media team. The Minister, in his interaction with Hindu said that the allegation against him of hiding figures is completely baseless. “We are acting in a transparent manner and publishing all the data in public domain. We will not hesitate to project the ground reality, only then there will be better cooperation from people” he said. He also said that he is actively giving updates on Twitter while answering to one of a question based on the role of social media and the unnecessary panic it is creating.