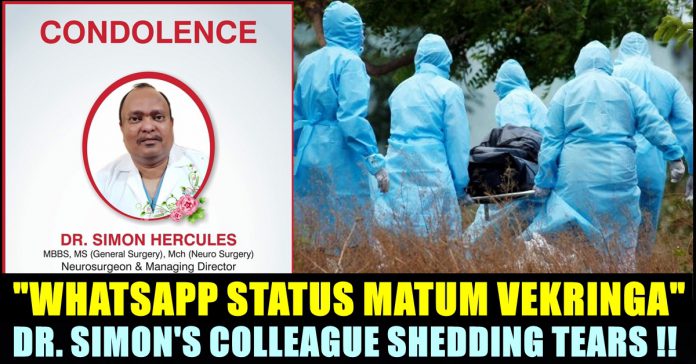 Doctor K Pratheep Kumar, an orthopaedic and arthroscopy surgeon shared the trauma he went through while trying to bury his deceased friend who is also a doctor. Due to the fear of getting infected by the coronavirus, mob attacked Pradheep who accompanied with two ward boys and an ambulance driver.

Dr.Simon Hercules died on Sunday after he contracted COVID 19 from his parents, according to reports. When he was being taken to a cemetery, a mob attacked the ambulance, alleging that the body of the deceased would spread the virus. Reports said that an ambulance driver and few more corporation health officials were injured as the mob threw bricks, stones, bottles and sticks to get rid of them. They stopped them to bury the body of Dr.Simon at two cemeteries.

The casket which was brought to the crematorium was destroyed by the mob and the windscreen of the ambulance which helped to carry the body of the 55 year old neurosurgeon was also smashed. Dr. Pradeep Kumar while explaining about the incident, said that two ambulance who tried to shift the body from the vehicle to the ground sustained severe injuries.

He said that two sanitation officials who were in charge of the burial were severely injured along with three others. After facing all these, Dr. Pradeep Kumar decided to drive the ambulance by himself to reach the crematorium again with some protective gears and with two ward boys.

Explaining the incident, Dr. Pradeep Kumar said “We quickly lowered the body into the pit as we were afraid that the violence maybe repeated. Even policemen were afraid of coming near to us” he told the media. “As there was just one shovel, I gave it to one of the ward boys to dig it and we used our hands to fill the 8-10 feet pit” he added.

“It was 1:30 pm when we finished completing the task.” he said who added that a policeman lent them a helping hand towards the end. The Chennai Police have arrested 21 people and registered case against them for instigating violence.

“I have been crying for the whole day. I don’t know how many people have experienced burying someone. I have seen death in my hands but I have never buried anyone, let alone someone who was close to me. It was very difficult, he [Dr Hercules] was such a gentleman and a kind-hearted doctor. No one could have ever hated him,” Pradeep let his emotions out to the media.

An emotional video of Dr. Pradeep’s friend is doing rounds in social media with emotional reactions :

“This is happening again. 😢”

Obstructing the last rites of the heroes (Doctors) is a crime & a sin. As rightly said, the doctor got the COVID from one among the public and this is what we are giving him back ?! #SimonHercules pic.twitter.com/YavvUhI5bR

This incident created huge outrage among social media where people are slamming those people involved in violence. The Indian Medical association warned of “appropriate retaliatory measures” if the authorities fail to stop such incidents.