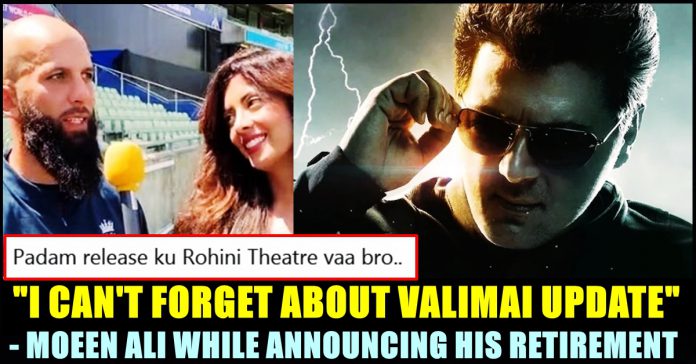 On Monday, English all rounder Moeen Ali who is currently representing Chennai Super Kings in the ongoing IPL tournament, came up with an announcement about his retirement from Test cricket. The 34 year old said that he want to enjoy the game of cricket as long as he can. The all rounder said that he is “happy and content” with whatever he had achieved in the longest format of the game.

“I’ve enjoyed Test Cricket but that intensity can be too much sometimes and I feel like I’ve done enough of it and I’m happy and content with how I’ve done” said Moeen Ali in a statement. “I am 34 now and I want to play the game as long as I can and I just want to enjoy my cricket” the cricketer said according to England cricket board.

“Test cricket is amazing when you are having a good day it’s better than any other format by far, it’s more rewarding and you will feel like you have really earned it. I will just miss walking out there with the lads, playing against best in the world with that feeling of nerves but also from a bowling point of view, knowing with my best ball, I could get anyone out” Moeen Ali said.

“I have enjoyed test cricket but that intensity could be too much sometimes and I feel like I have done enough of it and I am happy and content with how I have done” the cricketer added. Interestingly, while sharing about his test cricket experience for Chennai Super Kings, Ali said that he remembers about how someone asked him about “Valimai update” while recollecting about his memories of playing in Chennai Chepauk stadium.

About his experience on playing at Chepauk, Ali said “Yeah, that was the time of a pandemic. All I remember is two things. One, somebody kept asking me about “Valimai update” or something and other thing was the crowd was not even half and it was so loud for that grant so it was an amazing atmosphere” to the fans.

“Valimai” is an upcoming Tamil film that is going to feature Ajith kumar in the lead role. As the actor’s fan base is so large in the state, they were asking update about their idol’s upcoming film in almost all the prominent public events, even at election rallies. Video a fan asking Moeen Ali to tell “Valimai” update while he as fielding at the boundary line went viral among the Internet users at that time and grabbed headlines as well.

One of the spectators at Chepauk watching #INDvENG match has asked England cricketer #MoeenAli for #Valimai update pic.twitter.com/WRnM9RTAef

Check out some of the reactions for Moeen Ali’s recent statement :