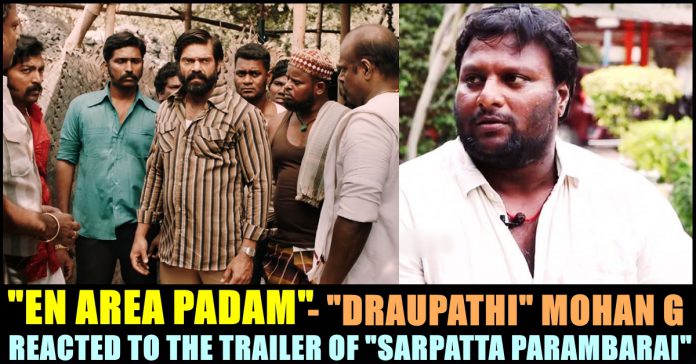 The most awaited trailer of Pa. Ranjith’s “Sarpatta Parambarai” released on Tuesday amidst huge anticipation among the fans of Tamil cinema. The film which is touted to be a period action drama on the face-off between Sarpatta Parambarai and Idiyappa Parambarai, shows Arya as “Kabilan”. The trailer hints him to be an ordinary working man who aspires to compete enemies on the boxing ring. Pa. Ranjith who is known for raising voice for the oppressed through his art work, has raised the expectation level with his intriguing trailer cut. Actor Suriya released the trailer through his official twitter handle.

“Hats off Pa. Ranjith, Arya and the entire cast and crew for creating this epic film #SarpattaParambaraiOnPrime The hard work put in by the team is evident onscreen!!” the actor said in his tweet while releasing the trailer.

Watch the trailer below :

Produced by Ranjith himself under his “Neelam Productions” and K9 Studios”, the film includes an ensemble cast. The 3 minute 13 second long trailer shows a series of events where Arya being confronted and humiliated by a number of people when he aspires to take down a leading boxer from the opposite side. The trailer also shows the romantic portions between Arya and Sanchana Natarajan.

The film is set in 70s and showcases the lives of the boxing clan that battled with each other in the North Madras. Lead Arya went through a major physical transformation to act in the film. He believes that the film will deliver a thrilling experience with action sequences and a storyline that would keep audience on the edge of their seats.

Extraordinary trailer @arya_offl …you r shining in each n every frame..
Looks brilliant..@beemji fireee..👌🏼👌🏼@KalaiActor every character u play u always do a great job..
Best wishes to the entire team..
Looking forward eagerly to watch the film..#SarpattaParambaraitrailer https://t.co/3YMTQRo8N2

Meanwhile, a twitter user asked “Draupathi” director Mohan G to tell something about the trailer of “Sarpatta Parambarai”. Replying to him, Mohan said that he would celebrate the film if the content is clear and expressed his admiration over the hard work and quality in the trailer. He also mentioned that the film is made on his area before congratulating Pa. Ranjith and Arya.

“Can see lots of hard work and quality in #SarpattaParambarai trailer.. En area padam.. If the content is clear will celebrate the movie.. Let’s wait till 22nd.. All the best to Pa. Ranjith and Arya” his tweet read.

Can see lots of hard work and quality in #SarpattaParambarai trailer.. En area padam.. If the content is clear will celebrate the movie.. Let's wait till 22nd.. All the best to @beemji & @arya_offl 💐💐 https://t.co/1HAHwPg6YQ