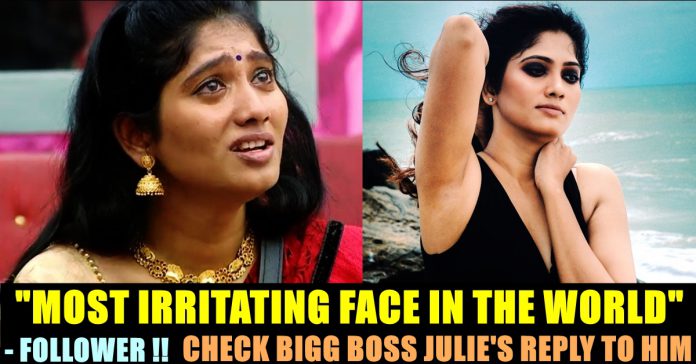 After her Bigg Boss stint, she signed a number of films but none of them saw theatrical release. Now, she who is busy uploading pictures from her photoshoots, posted a picture of herself with a caption saying “Winning doesn’t mean always being first .. Winning means ur doing better than you’ve done before ..” on Tuesday.

Replying to this post of her, a follower wrote “Most irritating face in the world😢😢😢” as his comment and Julie replied to him asking him not to see her pictures. “don’t see bro 😂” read her reply.

That didn’t stop there as the commenter came up with an another long comment saying that he is going to unfollow her. He also criticized Julie for her recent photoshoot and said that he lost his respect for her. Replying to that comment of him, Julie wrote “thanks bro.. My life my rules.. I’m born to live for myself not to satisfy others expectations.. But I respect ur msg and that’s y I’m replying..”

Check out the screenshot his comment and Julie’s reply below :

Being a nurse by profession, Julie acted in short films and music videos before entering Bigg Boss shows which are available in youtube. After getting participated in the Bigg Boss show, the people’s way of seeing Julie changed completely. Julie became the first victim of Bigg Boss’s “Kurumpadam” which is used by Kamal Haasan to reveal an individual’s original behaviour.

However, after seeing the “Kurumpadam”, Julie alleged that 5 seconds of her video footage is missing from it. Now, Julie, through her Instagram bio, identifies herself as an actress, model and environmentalist.