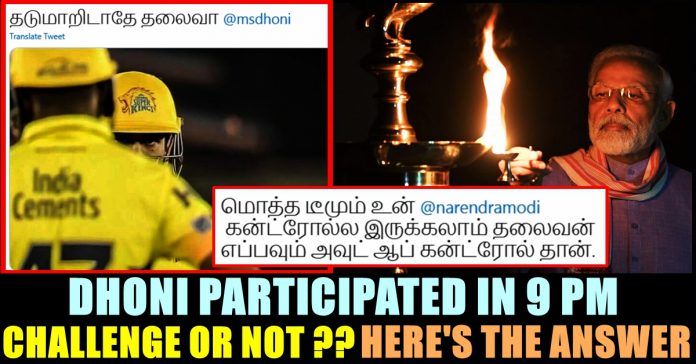 Entire India including sports and cinema personalities followed the words uttered by Prime minister Narendra Modi and participated in the 9 PM campaign initiated by him. “On April 5, Sunday, at 9 pm, I want 9 minutes from all of you. Turn off all the lights in your homes, stand at your doors or balconies and light candles, lamps or mobile flashlights for 9 minutes” said PM Modi in a video message on 2nd April’s morning.

“We must altogether, challenge the darkness spread by the coronavirus crisis, introducing it to the power of light. No one is alone during the lockdown, the collective super power of 130 crore people is with every citizen” he said in the video who also asked people not to violate the lockdown while following this.

A prayer in unity does make a difference. Pray for every being and stand together 🙏 https://t.co/EcmiX7EcoA

From Rajinikanth to Sachin Tendulkar, all the cinema and sports personalities released photos, pictures of them participating in the event. As far as Indian cricket team is concerned, prominent players such as Sachin Tendulkar, Virat Kohli, Rohit Sharma, Suresh Raina, Ravichandran Ashwin. KL Rahul, Hardik Pandya, Harbhajan Singh and many others participated in the event and expressed their support towards Prime Minister Narendra Modi.

My family & I thank the selfless #SanitationWarriors cleaning our surroundings & hospitals, disinfecting affected areas & thus keeping the virus at bay. Let’s also reignite our pledge to take care of our elders, the most vulnerable – by ensuring their physical & mental wellness. pic.twitter.com/tTheS9oO4I

However, no pictures or videos of former Indian captain and current Chennai Super Kings captain MS Dhoni participating in the event surfaced in social media platforms which instigated a speculation among netizens that Dhoni dislikes the decision of PM Modi. Those who disliked the initiation of our Prime minister started posting memes and tweets praising the Jharkhand born.

Check out some of such tweets posted before Sunday night :

However, on 6th April, Dhoni’s wife Sakshi Singh, in a way of proving those fans wrong, uploaded a post confirming that they lit 9 diyas at 9 PM like many others. Sakshi’s post stated 9 reason behind their participation in the event.

Dhoni is one of the most loved cricketer of all time. He is also one of the richest cricketers in the world right now and his real life got adapted as a film as “MS Dhoni” by having actor Sushanth Singh Rajput as Dhoni. The last time Dhoni was seen in a cricketing pitch is during the World Cup semi finals against New Zealand. He is all set to appear in IPL tournament to represent team Chennai Super Kings.

Comment your views on Dhoni joining the entire team in participating in the Diya challenge !!