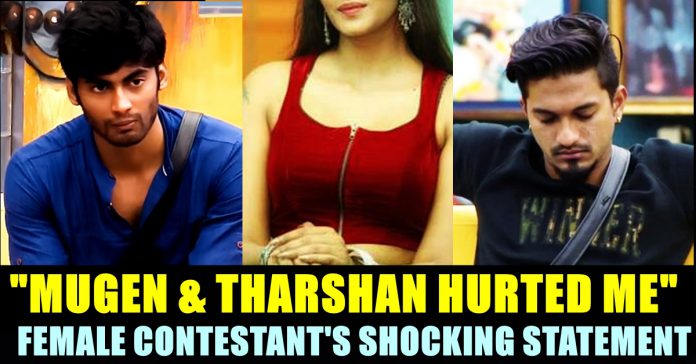 Meera Mithun, known as a participant in Tamil Bigg Boss show, now came up with a series of tweets accusing her co-contestants Abhirami Venkatachalam and Sakshi Agarwal. If you are aware of Bigg Boss show’s third season in Tamil, you must have known about Meera Mithun , one of the most controversial participant of the show. In those tweets, Meera says that she is going through mental trauma because of her Abhirami and Sakshi whom she knew before entering the Bigg Boss house.

She also accused Mugen and Tharshan for hurting her. In one of her tweet Meera wrote “Except sandy all of em in bigboss house can’t stand me and tey were really jealous of me n all tey want to do is humiliate me and isolate me, well that doesn’t affect me is my point. Mugen and tharshan two dumb men who started hurting me getting manipulated by all in the house.”

Except sandy all of em in bigboss house can't stand me and tey were really jealous of me n all tey want to do is humiliate me and isolate me, well that doesn't affect me is my point.
Mugen and tharshan two dumb men who started hurting me getting manipulated by all in the house.

Meera, further added that even in get together after Bigg Boss finale, every men of Bigg Boss show hurted her instead of standing by her. She said that Vanitha Vijayakumar is the only one who consoled her in the party and thanked her through her tweet.

Well even after the show, during getogether everybody hurt me
And none of the boys stood for me because tey were busy getting manipulated by gals
And idk how can tey be so ignorant of wat everybody is doing to a gal.

Well I couldn stand Ter anymore, everybody were trying to make me mad jus la before and oly @vanithavijayku1 stood by me the last day.
Thanku gal.
I cried to her oly how much more a woman can take and how r boys so dumb.

In the next tweet, Meera mithun said that Sakshi and Abhirami joined Joe Michael to ruin her reputation. She said that they both wanted Meera Mithun not to have any friends inside and outside the Bigg Boss house.

She said that Sakshi Agarwal and Abhirami along with Joe Michael posting her phone numbers in groups in order to make Meera to change her phone number. Meera says that changing her number will cause her big lose as she has national and International contacts in it.

So here's another challenge am facing recently from Joe gang which includes abirami and Sakshi, tey had posted my phone number in all personal groups and everyday many are calling me and doing mental harassment and trying to make me insane 🙂

What do you think on these series of accusations of Meera Mithun ?? Comment your views !!