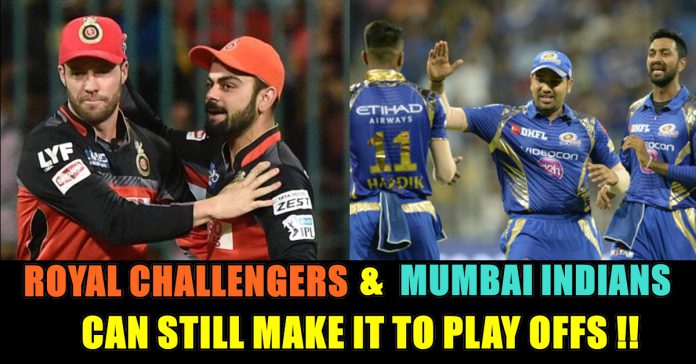 The IPL defending champions Mumbai Indians are on the brink of elimination from the tournament as they are languishing in the sixth position with 10 points from 12 games. With five teams above them in the points table with more points than them, one might expect that Mumbai’s season is over. But, the Rohit Sharma-led team can still make it to the playoffs.

For that to happen, they should win both their remaining games and expect the results of the matches to go their way. In that case, they will be having 14 points at the end of the league stage and they will be banking on their net run-rate, which is already superior to their competitors. In fact, Mumbai Indians’ NRR is the best among the eight teams in the tournament, thanks to the narrow defeats they suffered early in the tournament. As of now, only Sunrisers Hyderabad and Chennai Super Kings have qualified for the playoffs while Delhi Daredevils are out of contention in reaching the last four.

Kings XI Punjab, Kolkata Knight Riders, Rajasthan Royals, Royal Challengers Bangalore, along with Mumbai are in contention for the remaining two spots going into the last week of the league stages. This is how the points table looks like after Mumbai Indians’ game against Rajasthan Royals.

How will the outcome of other matches help Mumbai Indians’ case? How will the points table look like if the results of these matches go in Mumbai’s favour? That effectively leaves five teams fighting for the remaining two spots as things stand now. When Royal Challengers Bangalore take on Kings XI Punjab at the Holkar stadium in Indore on May 14, they will have their task cut out in a bid to make it to the final four.

For starters, RCB will have to secure a comprehensive win over KXIP to stay afloat in the tournament. Should RCB win their remaining games – against Sunrisers Hyderabad and Rajasthan Royals – and if other results go their way, Virat Kohli and Co have a good chance of qualifying without factoring in the NRR.

Apart from winning their three remaining matches, we take a look at the various scenarios that would help RCB seal a play-off berth. It would help RCB if RR, who are currently fifth on the table with 12 points and a NRR of -0.347, win against Kolkata Knight Riders on May 15, before facing RCB on May 19 at home. That would leave them tied with RCB, should they win the last two games, but Kohli’s side would bank on NRR to get them through. With 12 points from 11 matches and a NRR of -0.056, KXIP are currently at the third spot, and have a good chance of making it to the final four. However, if RCB beat them on Monday, it will take Kohli’s side a step closer to the play-off spot, and KXIP’s win over Mumbai Indians on May 16, will further boost RCB’s chances leaving MI out of the reckoning. Thus KXIP’s final fixture, against CSK, would be inconsequential to RCB’s progress. Like KXIP, KKR too have 12 points, but from as many games and a NRR of -0.189. They next two games are against RR and SRH, and RCB would benefit if they end up on the losing side in both. However, should KKR win even one of their remaining two matches, it would end up being a difficult tussle, as they too would be tied at 14 points. Just a rung above RCB in the sixth spot, MI have 10 points from 12 matches and a NRR of 0.405. Apart from RCB, MI is the only other team that is precariously placed with their fate hanging by a thread. MI’s last two matches are against KXIP and DD, and should they lose both, RCB would have a clear headway to the top half of the table. However, if they end up winning both, it would again boil down to a three or four-way tussle, with MI having an edge thanks to their positive NRR.