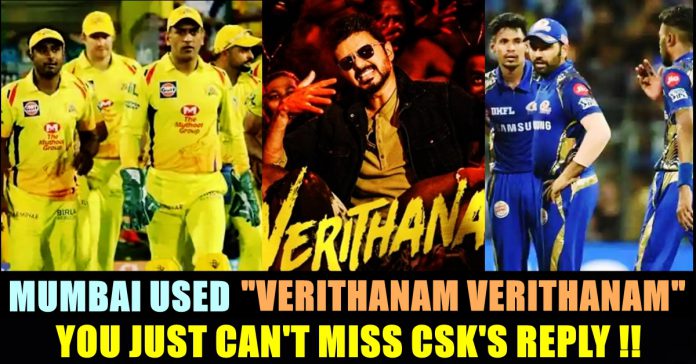 The most awaited IPL tournament is all set to get inaugurated in less than 20 days amidst the COVID 19 crisis. Almost all the players of every team have reached UAE and are self quarantined to participate in the tournament. As all the preparations are being made in full swing by the management, Twitter banter between IPL teams also started taking place to keep the fans engaged.

The defending champions Mumbai Indians, on 2nd September uploaded a video in their official twitter account, highlighting the special moments of their team from last year IPL season. The video showed the perfect yorkers of Malinga, Rohit Sharma’s effortless batting ability and also their fielding excellence. The song they used for the video compilation is A.R Rahman’s recent chartbuster “Verithanam, Verithanam” from Tamil movie “Bigil” directed by Atlee. The song was sung by our very own “Thalapathy” and Tamil based twitter users surprised on seeing a MI using the song for one of their videos.

One such fan alarmed team Chennai Super Kings by tagging the official twitter account. “Thala ivan Namma paatu’laye kai vaikuran paaru” (Boss, he is using our song) he wrote in his tweet.

Replying to this tweet, Chennai Super Kings, hinting about there is something big coming up on behalf of CSK, added a picture of Rajinikanth from “Baashha” and said “Let them use”

In the scene, the character Baashha will say the dialogue “Veikatum” to his accomplices after hearing about his rival “Antony” bombing his properties to avenge him.

Chennai Super Kings team is one of the most loved franchise in Indian Premier League tournament. The team not only loved by the fans who belong to Tamilnadu but also by the fans across the world. The reason behind it is nothing but the captain who leads the team since the inaugural season of IPL.

Check out some of the hilarious reactions for the comment of CSK below :

Along with the fans, Lyricist Vivekh who wrote the son “Verithanam” said that he won’t give his song to a team which doesn’t have Sachin Ramesh Tendulkar. He also requested CSK to do a “Marana” edit as reply.

Comment your views on Mumbai using “Verithanam” to promote their team !!