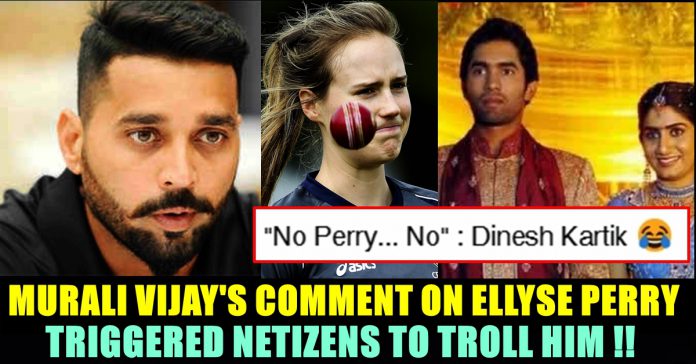 Murali Vijay’s wish on having dinner with Australian allrounder Ellyse Perry triggered the social media users. Murali Vijay is an Indian international cricketer who plays as a right-handed opening batsman. A regular member of the Indian Test team, he also represents Tamil Nadu in first-class cricket and Chennai Super Kings in the Indian Premier League.

Vijay debuted in ODIs against South Africa in the third and final one dayer on 27 Feb 2010. Vijay played for IPL franchise from his home town Chennai Super Kings till the sixth edition and represented Delhi Daredevils in IPL season 7. He was one of the key performers for Chennai in the 3rd edition of IPL in 2010 when Chennai were crowned champions. His first century for Chennai Super Kings was in the third season of the IPL where he scored 127 runs off 56 balls against the Rajasthan Royals.

Murali Vijay’s personal life has a special attention from the fans of Indian cricket. He who represented India as opener in Test matches, missed out to appear in recent test series due to the emergence of Prithvi Shaw, Shubam Gill and Mayank Agarwal. However, the cricketer is spending a quality time with his family as the entire country required to remain quarantined. He also seen attending live sessions in Instagram ti interact with his fans and followers.

In a recent live session conducted by his home team Chennai Super Kings, Murali Vijay was asked to name two cricketers, who he would prefer to have dinner with. For that question, Murali Vijay said that he would like to have dinner with Australian woman all rounder Ellyse Perry and Indian lefty Shikar Dhawan. He said that Ellyse looks “beautiful”.

This statement from the cricketer triggered the Internet users to troll him severely. Few even dragged the personal life of the cricketer to make fun of his choice. Check out some of their reactions below :

"Murali Vijay said he want to have dinner with Ellyse Perry because she is so beautiful"
.
.
.
.
Meanwhile DK talking to Vijay's Wife: pic.twitter.com/CZPTDMDc75

Someone should tell DK's story to Perry's husband before it's too late pic.twitter.com/wH5znNSyX9

Reaction of Ellyse Perry after getting the news https://t.co/23fCZ3BisY pic.twitter.com/z2t1sezbc6

Murali Vijay and Dinesh Karthik had been really good friends for long but the friendship was destroyed by Murali Vijay in 2012 during IPL-5 when Dinesh Karthik came to know about his wife’s affair with Murali Vijay. Dinesh Karthik divorced his wife, Nikita while she was pregnant with a boy and soon after that Murali vijay and Nikita married each other.

Both Murali Vijay & Dinesh Karthik have kept mum on this issue and have kept themselves away from this issue. The three involved in this triangle have acted maturely and have moved on in their life rather than acting as a gossip material for media. Dinesh Karthik later married to Deepika Pallikal and this new couple seems to be quite happy.