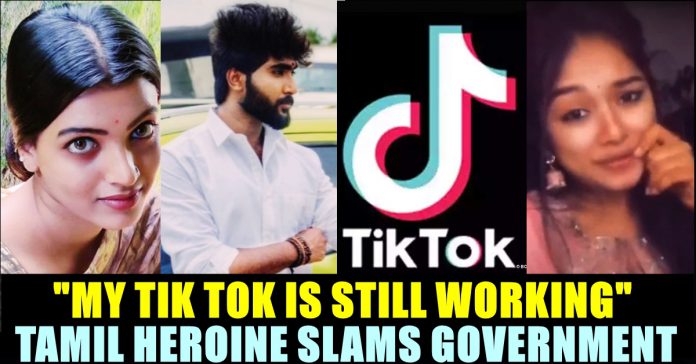 As soon as Government announced that the 59 china based mobile applications including Tik Tok and Share it are getting banned, they became unavailable at the Google play store. However, people who already had the applications in their mobile phones are using them and it is said that it will take some more time for government to make them automatically inaccessible despite of their existence in phones.

Now, actress Meera Chopra who is widely known as Nila among Tamil film audience, posted a tweet saying that she could still use the app and blamed the government. She said that there is no point in banning it if the app still works in everyone’s phone. “My #tiktok still works, wheres the ban??” the actress asked in her first tweet.

To one of her follower who said that the ban won’t effect on the existing applications, Meera asked “Then whats the point, why would people who has become #tiktok stars uninstall it??”

Then whats the point, why would people who has become #tiktok stars uninstall it?? https://t.co/CkVYhSd7fZ

However, these tweets from the actress didn’t go well with the netizens, especially among those who are standing by the decision made by the Government. They asked the actress to delete the app instead of complaining against it and another one said “One side you are telling it was a good decision to ban Tik tok and you are using also Tik Tok. Why? Don’t open. Quit it”

Check out some of the reactions she received :

So Uninstall TikTok.. It Is that Difficult For You To Do??.. why Always Trying To Defame Our Indian Government Diectly And Indirectly.. When We Stay United We Stay Strong…

Have some patience. The Telecom operators yet to receive a copy of ban. It will be banned soon by telecom.

One side you are telling it was a good decision to ban Tik tok and you are using also Tik Tok. Why? Don't open. Quit it

Are you the one who is having the app still or the one who uninstalled it ?? Comment below