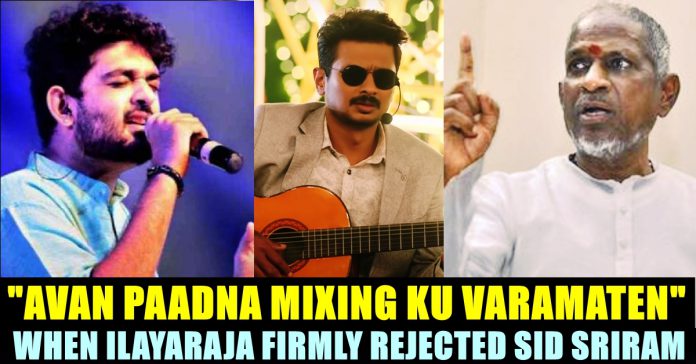 In his recent interaction with popular actor and filmmaker Chithra Lakshmanan, Director Mysskin revealed that Ilayaraja doesn’t wanted Sid Sriram to sing “Unna nenachu” in his recent film “Psycho”. Music maestro Ilayaraja has scored the music for more than 1,000 films and 7,000 songs. He has also rendered 500 numbers and won the national award five times. Being a highly recognised, most lovable Indian musician of all time, Ilayaraja is also known to be highly possessive about the music that he has created in all these years.

Known for a number of controversies in his 45 years of film music career. Recently, he accused music director Govind Vasantha of 96 movie for using his songs in his film “96”. He called people who are using his songs without his permission as “Impotent” which created huge outrage. Now, Mysskin has revealed that Ilayaraja initially avoided Sid Sriram and he made him sing that song without Ilayaraja’s permission which turned out to be a massive blockbuster among the fans of the musician.

Mysskin who is an ardent fan of the musician since his childhood, worked in “Psycho” with Ilayaraja for the third time after working in “Nandalaala” and “Onayum Aatukuttiyum”. While talking about the composing of “Unna Nenachu” Mysskin said that he demanded multiple tunes from Ilayaraaja to get a best one. “When I wanted Sid Sriram to sing the song, he completely denied. I adamantly said that I want Sid Sriram to sing the song. We fought for 5 long days on this. He said that he won’t come for voice mixing if Sid Sriram sings the song. I requested him not to come at all. Then we made Sid Sriram sing the song without his presence.” said Mysskin who further added that Ilayaraja changed a BGM for him after that incident.

“That song would have been a massive hit irrespective of the singer. As a musician what Ilayaraja appa thought would have been right. My assistant’s introduced Sid Sriram to me by playing one of his disgusting folk song. However I liked the uniqueness in his voice. When I recommended him, he (Ilayaraja) completely denied. He can deny, that’s totally understandable. End of the day it is just a difference of opinion in a creative matter” the filmmaker said. After that incident, they continued to work on the BGM of the movie, he added.

Watch the video below from 4th minute :

The song “Unna Nenachu” acted as an unique selling proposition for “Psycho” movie as it brought people to the theatres and made the film a massive hit. The song which is ruling the playlist of many people is expected to add in the list of evergreen songs of the music maestro. It is notable that Sid Sriram received several awards for singing this song.

Ilayaraaja debuted through 1976 film “Annakili” and went on to achieve several awards and accolades across the world. Nicknamed as Isaignani and often referred to as Maestro, people would consider his music as a therapy for depression and loneliness. Comment your views on this decision of Ilayaraja !!