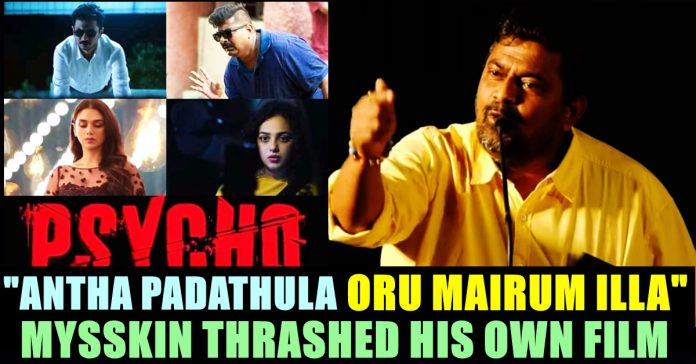 Actor and Director Mysskin who is known for making quality films in Tamil cinema has attended an event of the national award winning film “Baaram”. The filmmaker, to support the film “Baaram” has degraded his own film “Psycho” as he says “Baaram” deserves to be celebrated by the audience of Tamil cinema.

In the event, Mysskin requested the press people to support the film “Baaram” and says that the film made a severe impact on him since he watched it. “Initially I underestimated the film before watching it after seeing the lady who directed it. Then I came to know Vettri Maaran is going to present the film and Ram recommended me to watch it as well. But the movie literally gave me slipper shots which I realized only during watching it. After watching this movie, I asked my brother when is the last time he met our parents. Though I take care of my parents, this film gave me a guilt of not being with them” said Mysskin about the film Baaram.

Further he went on to explain about the mindset of the audience nowadays. “After watching a movie, many of them are saying that it can be seen for once. For once what ? Are you going to stay in the theatre forever ? Everyone is visiting theatres to watch a film for once. ain’t it ??” Mysskin asked who went on to reveal about his conversation with a fan who watched Psycho.

“One guy came to me and said that he watched Psycho several. I interrupted him and asked him to consult a doctor as that film has nothing to watch more than once. If you watch that film for once, it will give you ideas to become a psycho. If he watched it more than one time, it means he has a serious issue” said Mysskin in a humorous way.

However, the filmmaker’s only intention is to sell the film “Baaram” for its strong content as he sweared to stick posters for the film by himself to promote it. “We are all living our lives by considering the future. But the film reminds us about our parents who are in the past somewhere. The film deserves to be watched by everyone.” said Mysskin to promote the film Baaram.

Baaram was directed and edited by Priya Krishnaswamy. It won the National Film Award for Best Feature Film in Tamil, the only Tamil film to win at the 66th National Film Awards. Comment your views on the way Mysskin tried to promote the film !!