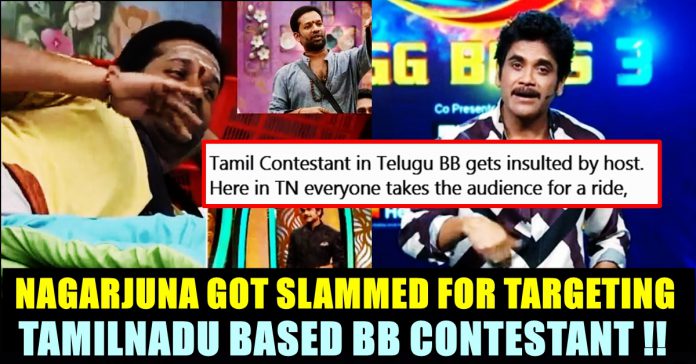 Bigg Boss Telugu 3 which is nearing its finale, is creating anticipation, day after day because of the ample controversies at stake in the house. Bigg Boss is one of the popular Television show which is keeping the viewers of south India busy. As the Tamil version of the show is being hosted by Kamal Haasan, the Telugu version of Bigg Boss show has been hosted by Nagarjuna.

Unlike Kamal Haasan, Nagarjuna is known for his own way of hosting the show. Recently he took break from hosting the show and went to spain to celebrate his birthday with his family. That week Ramya Krishnan was brought as “guest host” to host the Telugu Bigg Boss show.

The actor is now facing the wrath of social media users for blaming one of a Bigg Boss contestant Baba Baskar by playing few clips in weekend episode. In the videos Baba Baskar was seen discussing about the one he nominated. When one of his housemate Varun asked him why he nominated Siva Jyothi, Baba Bhaskar said that he has many valid reasons to nominate her. But when another housemate Sreemukhi asked him the same question, Baba said that Siva Jyothi is the strongest contestant of the house and could not be evicted. He iterated that it is the reason behind him choosing her for nomination.

However, online fans are supporting Baba Bhaskar and are saying that the Telugu Bigg Boss management is diverting the audience from noticing the flaws of other few contestants. They felt Nagarjuna is targeting Baba Baskar without reason.

Tamil Contestant in Telugu BB gets insulted by host. Here in TN everyone takes the audience for a ride, emotional people will get fooled easily with sympathy stories, good looks, dance etc, hate those from own State.#BiggBossTamil3

I strongly felt that today's episode is a BIGG COVER UP of Unfair wildcard entry.

To divert the topic, #BabaBhaskar was used as bait in climax for BIGG BOSS team.

Looks like the management tried to highlight #sreemukhi & in the process shown some videos of #bababhaskar which were not at all considered as mistakes.

And ended up with a Big Self Goal infront of viewers. Boomerang.#BiggBoss #BiggBossTelugu3

#BiggBossTelugu3 #BiggBoss3Telugu ..it jus tells quality of Host in #BiggBossTelugu .
Cheap people always act cheap..they cannot be noble no matter where ever they taken.

Baba Bhaskar who was born in Hyderabad, is a well known dance choreographer in Tamil film industry and recently made his debut as director in G.V Prakash-Parthiban starrer “Kuppathu Raaja”.

What do you think on these reactions ?? Comment your views !!