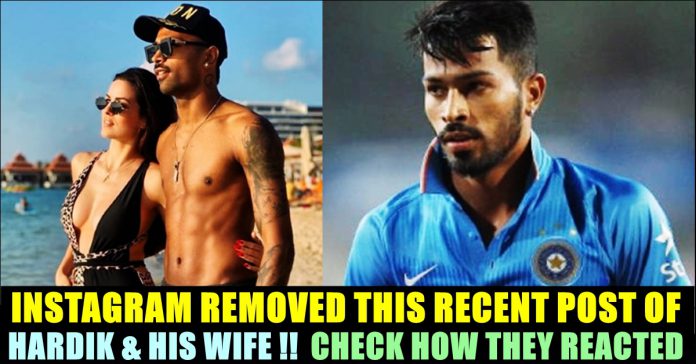 A photo uploaded by Natasa Stankovic, wife of Indian cricket all rounder Hardik Pandya, was removed by Instagram management and made the Bollywood actress and former Hindi Bigg Boss contestant upset. She who questioned the strange activity of Instagram through her story, re=uploaded the post with different caption. In the initial post, Natasa who gave birth to a baby boy recently can be seen receiving a lovable kiss from her husband.

Natasa got engaged to Hardik Pandya on 1st of January 2020 and the couple gave birth to a baby boy on July of the same year. The couple has been sharing the pictures of their adorable family, for past few months. Check out some of them below :

We are blessed with our baby boy ❤️🙏🏾

As the Indian Premier League is approaching, players of all the teams were left to different venues for practice. Natasa who started missing her husband due to his absence, expressed her feelings through an Instagram post saying that she “already started missing him” by tagging Hardik Pandya’s official twitter account.

Minutes after uploading, the post received wide reach and Hardik replied to it by saying that he is missing her too. However, the post didn’t last long as it got deleted by Instagram for violating community guidelines.

Sharing the screenshot in disappointment, Natasa wrote “Seriously ?” in her story by tagging Instagram.

Check out the screenshot of story Natasa uploaded here :

However, the serbian dancer uploaded the same picture of Hardik kissing her again with different caption.

Hardik who took it lightly, laughed and said “love you” to Natasa again.

Check out the screenshots of their comments below :

After appearing in few films in minor roles, Natasa appeared in Bigg Boss, where she stayed in the house for one month. She gained popularity when she appeared in the popular dance number “DJ Waley Babu” by Badshah. Hardik Pandya who is one of the prominent all rounders of Team India, is one year younger than the actress.