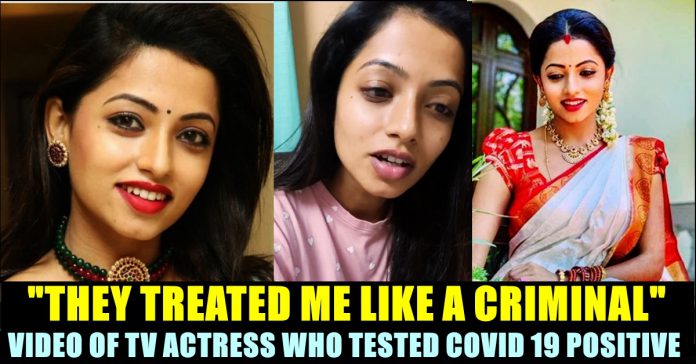 While the entire world looks terrorized with the existence of increasing COVID 19 positive cases, South India TV actress Navya Swamy who also tested positive appeared in an interaction with a popular youtube channel and asked people to “Stay Strong” and not to worry about the virus. With TV news channels sensationalizing the pandemic situation, Navya appeared in the interaction only to spread positivity.

Initially she uploaded a video in her official Instagram account to inform her followers about her health state. She asked people not to believe rumours and to stay positive. The actress said that she is doing absolutely fine as well.

“Initially I cried after knowing that I have tested positive but later realized that there is nothing to be worried about. I had no symptoms and major effects like respiratory problems and all but it took time for me handle the way people treated me and this social distancing thing.” said Navya in the interaction who asked people not to panic about the situation.

“When I had body pain, I thought it was because of my dance practice and my hectic schedule but once the report came I got shattered and cried. People started treating me like untouchable, like a criminal. It took me lot of courage and mental stability to deal with it.” Navya Swamy said.

Navya further said that the COVID 19 is not as deadly as cancer or any other major disease. “I will tell everybody not to panic. Viral fever is actually more sufferable than this. Today is my fourth day and I am already fit and fine. There is nothing wrong about testing positive for COVID 19, there is nothing to be ashamed of.” Navya said.

“Before getting my report, there was a pain in my ribs area. I had body pains. I had mild pain in my head for two days. I realized news channels are exaggerating the issue, So I stopped following news channels. If immunity system of an individual is in a bad state or if they are aged, there are more chances of dying. Death rates are so low, only aged people ad people who have less immunity power are dying.” Navya said in her video.

This video of the actress would help people who are quarantined due to the COVID 19 pandemic to get some positivity. Many people who watched this interview of her lauded her for creating so much positivity around her and wished her to recover soon.