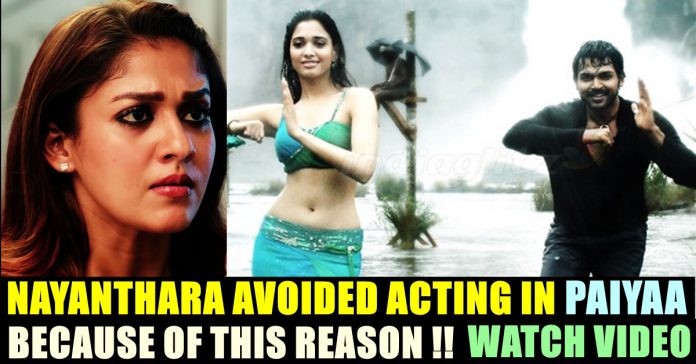 “Paiyaa” is a romantic film directed by Linguswamy. The movie was released in 2010 and had actor Karthi and Tamanna in the lead roles. The film follows the journey of two strangers – a jobless carefree man (Karthi), living in Bangalore, and a girl (Tamanna) with whom he has fallen in love. Upon the girl’s request, he drives her to Mumbai, while a group of gangsters follow them, planning to kidnap the girl. Meanwhile, the man also has a past in the city and he goes there to sort it out.

Linguswamy, in a recent interview has revealed that the role of Tamanna was supposed to be done by Nayanthara. Fondly called as “Lady Superstar”, Nayanthara is one of the very few actresses who are working in the film industry for 15 long years now. Being the highest paid actresses of South Indian film industry, Nayanthara is also the only actress who manages to act in both female centric movies and hero oriented movies today. The surprising fact about it is that the “Bigil” actress shines in both the regions.

Linguswamy in his interaction with senior filmmaker and actor Chithra Lakshmanan, has revealed why Nayanthara avoided acting in his road film “Paiyaa”. The director said it while explaining the making of the film. He said that Nayanthara didn’t accept the film due to salary issues.

“I narrated the script to Karthi when he was in Hyderabad for “Ayirathil Oruvan” shoot. He liked it very much.” said Linguswamy who went on to add that his brother and producer of the film Bose talked to Nayanthara to do the heroine role.

“We planned to cast Nayanthara in Tamanna’s role. One of her film didn’t do well in the box office at that time. Bose asked her to reduce her salary a bit as her previous film is a flop. That irked her who thought that there is no reason to reduce her salary as she is going to do the work as always. She denied to act in the movie” said Linguswamy “That news grabbed many people’s attention at that time. It gave us a wide publicity for free at that time. She gave those dates to Aadhavan and we roped Tamanna in” the filmmaker added.

Watch the video below from 2nd minute :

In the career which spans more than 15 years, Nayanthara acted with almost all the top actors including with the newcomers such as Sivakarthikeyan and Vijay Sethupathi. Nayanthara is currently enjoying the release of her recent release “Darbar” with Superstar Rajinikanth and her previous ventures are “Viswasam” with Ajith and “Bigil” with Vijay.

Now on the work front, the actress is busy in shooting for “Mookuthi Amman” which marks the debut directorial of RJ Balaji and for “Nettri Kann” under her own production house. Linguswamy who directed the sequel of his Sandakozhi is going to remake telugu blockbuster “Rangasthalam” by having Raghava Lawrence in the lead role.

What do you think on the decision made by Nayanthara ?? Comment your views !!