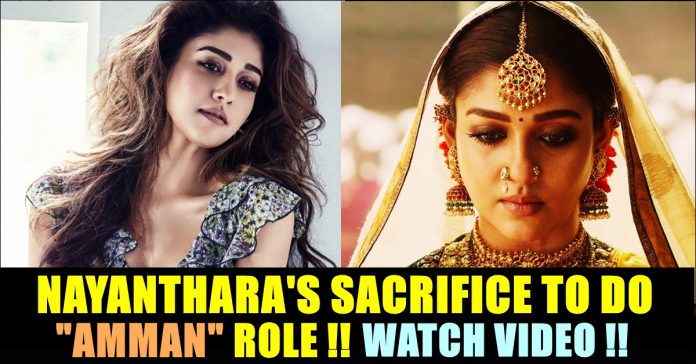 RJ Balaji needs no introduction to the people of Tamilnadu as he is a popular radio jockey, presenter, comedian and actor based in Chennai. He is best known as the host of the BIG 92.7 show Take it Easy once and its now defunct segment Cross Talk, where he made prank calls to unsuspecting victims. After appearing few films as comedian RJ Balaji made his debut as protagonist in his L.K.G film which received positive response from the audience which resulted as success in box office.

It is well known that RJ Balaji also did writing for his debut film. Recently it was announced that the multi talented is all set to start his next project by having Lady Superstar Nayanthara in it. The film which seems to be a female oriented one is titled as “Mookuthi Amman”.

Nayanthara who is known for her stardom in Kollywood industry for acting along with top actors such as Rajinikanth, Ajithkumar and Vijay is also known for few of her female oriented films. Aramm, Maaya, Kolamavu Kokila are some of her notable films in which she played the role of a protagonist.

The official announcement about the same was made by RJ Balaji in a T20 match between India and Bangladesh where he did commentary.

Now in a recent interaction with press about his new venture “Mind Voice”, RJ Balaji has revealed how he approached Nayanthara for the role. “We were friends since Naanum Rowdy Thaan and after writing this story I have been narrating it to many of my friends. I narrated it to Vignesh Shivan in a friendly manner and didn’t think of asking Nayanthara for the role initially. After she asked me why I haven’t narrated the script to her, we met in Teynampet and after the narration of first few minutes, Nayanthara accepted to do the role.” said RJ Balaji who also informed that the movie conveys a strong social message and has no hero, heroine elements in it.

Further he added that Nayanthara called RJ Balaji and told him that she went through fasting when she did the role of Seetha in Rama Rajjiyam. “This film is not a satire on devotional films. I myself a big devotee of many gods of various religions. This is a pure devotional film and Nayanthara is going to essay a role proper “Amman”.” As we are going to start the schedule soon our entire crew has converted into Vegetarian and She particularly called me and said that she went through fasting while doing “Ramarajiyam” and asked our team to do the same.” said RJ Balaji in the interview.