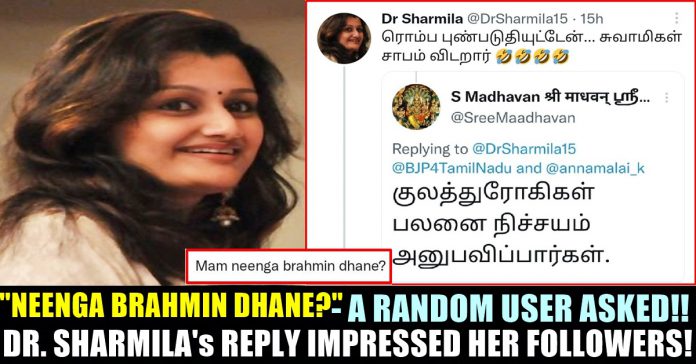 Dr. Sharmila has recently engaged in a heated conversation with a follower on Twitter. The follower has asked the actress if she is a brahmin. The actress without hesitation has replied to the question. A series of arguments has blossomed following her reply.

Dr. Sharmila is quite active on Twitter. She shares lots of posts associated with the glories of Dravida Munnetra Kazhagam (DMK). She also shares posts that satirize the Union Government and the fanatics of BJP.

In recent days, a cold war between a few brahmins and non-brahmins has been going on especially in Tamil Nadu. With the implementation of the Non-Brahmin Priest’s scheme, the issue started bubbling up. The issue reached the next level when a video of KT Raghavan was released. In Twitter, this has been fueled.

Dr. Sharmila (@DrSharmila15) has shared a tweet with the screenshot of a stranger condemning her and BJP’s State President, Annamalai. In the screenshot of the tweet, they were cursed. “These same caste betrayers hurt definitely reap for their deed” was the content of the screenshot. However, the post has been deleted by the stranger who uploaded it.

She has sarcastically captioned her tweet with the screenshot as “I have hurt a lot. He is cursing me!”

Following this, a random user has asked her, “You are a Brahmin right?”. To this Sharmila has replied, “I am a human first. I prefer to be known and respected for my credibilities and qualities rather than my birth.” This did not come to an end with this.

I am a human first ..I prefer to be known and respected for my credibilities and qualities rather than my birth

The woman has further said, “Brahmin is a quality mam, not by birth. Anyone can be a brahmin”. Dr. Sharmila has replied, “Abbé….and if what you say is true then unfortunately many Brahmins themselves do not know the difference.” She has also added that treating everyone equally irrespective of birth is the first step towards upliftment.

Abbé….and if what you say is true then unfortunately many Brahmins themselves do not know the difference

I am never against Brahmins …I am only against the ideology of Santayana and hindutva….I speak for all the oppressed both men and women including those in the 3 percent…

Who said brahimins are not into other jobs ? come out from the stupid myth u people continue to have on them. Look at the job this courageous lady is doing. U don’t even imagine of doing this in your life time. Don’t talk what ever comes in your mouth.

Do u have any guts to ask the same question to other religions and their practices ? There is role for caste here. Even brahmins are not allowed inside Sanctum on many temples . U know that ? It’s their practice which they follow in that particular temple…

In a comment, a person has said Periyar. Dr. Sharmila ended the conversation by saying Periyar is still living in our hearts, thoughts, and actions. Also in few comments, people have praised Dr. Sharmila.