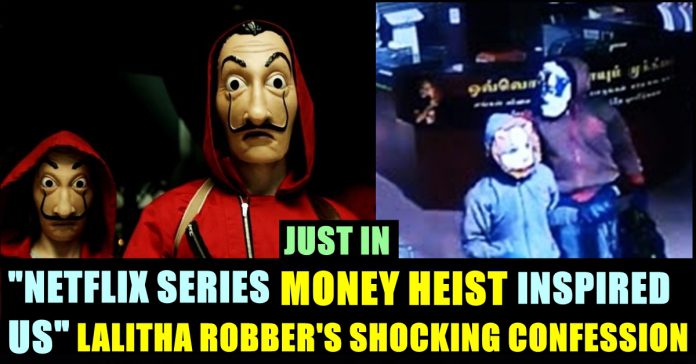 Lalitha Jewellery, a three-storeyed building near Chathiram bus Stand, was burgled in the early hours of Wednesday after two-masked men entered the premises by drilling a hole in its wall. Chairman Kiran Kumar said jewellery worth Rs 13 crore was stolen from the store.

On Thursday, Tamil Nadu police released CCTV footage of two masked men entering the ground floor which houses the Gold and Diamond’s section. The theft had happened between 2- 3 am in the morning, the police officials told local media.

The jewellery store, which was opened five years ago, is located next to a government-aided school. The burglars reportedly reached a wall leading to the west end of the store through the school building, which was shut on account of quarterly exam holidays. They drilled a hole in the wall to gain entry.

The police have recovered 5kg of gold from Manikandan. On checking the gold bar code, it was confirmed by the police that the recovered gold was part of the loot that was stolen from Lalitha Jewellers.

Manikandan has confessed to the police that it has only his share of the robbery. Police have now intensified their search for Suresh. Suresh also happens to be the cousin of Murugan, a wanted smuggler across the country. The Trichy policemen who have been conducting the preliminary investigation have rushed to Tiruvarur.

Trichy police have sent 7 units searching for the robbers. It was earlier suspected that people from the northern part of the country may have been involved in the robbery.

Now, to our shock, Manikandan who was in police custody, has revealed that the popular Netflix series “Money Heist” aka La casa De papel is the major inspiration for their act of robbery. The series which is famous across the world, involves eight robbers, code-named after cities and led by the Professor from an external location. Manikandan said that Murugan who plotted the plan for Lalitha Jewellers robbery is a big follower of the series.

Manikandan reportedly said that Murugan who acts as “Boss” would spend his time mostly in a van similar to the character “Professor” in Money Heist. As said, Murugan who is a most wanted accused, is physically not well according to reports. Tamilnadu police has allotted a special team to catch him soon.

According to the statement of Manikandan, the robbery of Lalitha Jewellery indeed has many similarities with Money Heist, including the masks, costumes, hole in the wall and a person who helps from outside.

It was earlier suspected that people from the northern part of India may have been involved in the robbery. Five men had been questioned earlier under the reason of suspicion. But after that Vizhuppuram district, SP Jayakumar, on seeing the sandals and leg color tone of the robbers in CCTV footage, discovered that they are from Tamilnadu.