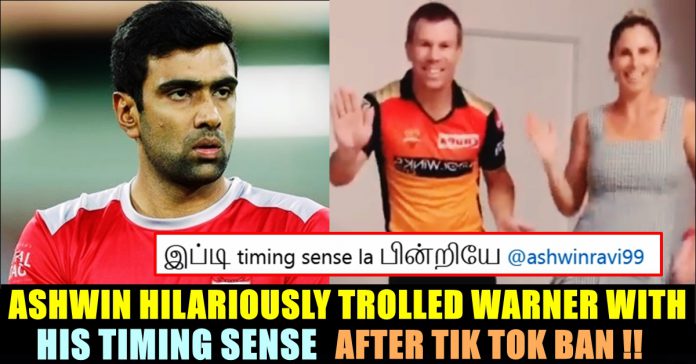 As soon as the news regarding ban on Tik Tok emerged, people who are using the app with huge number of followers got highly dejected and trying all the ways to redirect their followers to follow their other social media accounts such as Instagram. Hilarious reactions, trolling the ardent users of the app is also surfacing in Facebook and Instagram.

Check out some of them here :

#RIPTiktok 🙏
– TIK TOK Users Reaction after Banning of it !
– God Bless all ✅ pic.twitter.com/aBvEPcAhZ9

This decision from central government has created a huge impact in the trending list of social media platforms as enormous number of memes and reactions started surfacing regarding the ban on the micro video creating app. Indian cricketer Ravichandran Ashwin made use of this opportunity to troll David Partner against whom he played several matches in the past.

David Warner is very much famous for his Tik Tok videos in India and most of his followers are from India as well. Realizing it, Warner started making Tik Tok videos based on Indian movies, especially based on Telugu movies to impress the fans of his Sunrisers Hyderabad team fans. He has been doing this with his family since the lockdown was implemented. What started as a mere entertainment video, turned out viral as stars from India such as Allu Arjun encouraged the cricketer to do more.

On seeing about the announcement, Ashwin took to twitter and wrote “Apo Anwar?” and tagged the official twitter account of the cricketer. The tweet Ashwin posted is a reference to a blockbuster epic Tamil film “Baashha” of Rajinikanth. In that particular scene, Rajinikanth, after knowing that his friend “Anwar” is in danger would ask his father about it by uttering “Appo Anwar?”. (Then what would happen to Anwar??)

This timing sense of Ashwin got widely appreciated by his followers and many trolled Warner along with Ashwin in the comment section. Check out some of their comments below :

Comment your views on this hilarious response from Ashwin !!