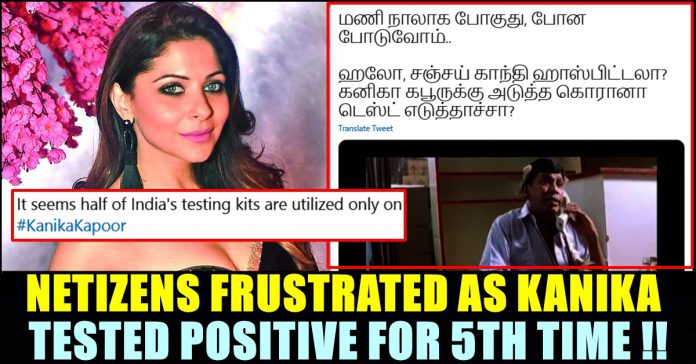 Singer and Bollywood Celebrity Kanika Kapoor tested for the fifth time for Coronavirus and her result showed positive again. Netizens who got to see about this update, slammed authorities for wasting test kits. “When we say TEST MORE, we don’t mean only for #KanikaKapoor” said one of a twitter user, in a way of expressing her frustration. “Testing times for #KanikaKapoor for being tested every alternate day!” wrote the other one in the micro blogging social media site.

Kanika Kapoor, a popular bollywood singer who is known for singing songs such as Baby Doll and Chittiyaan Kalaiyaan, tested positive for the novel coronavirus for the first time on March 20. She got admitted in the King George’s Medical university hospital in lucknow. The 41 year old actress was in London for a while and returned to Lucknow last week. She also avoided informing the authorities about her travel history.

To our shock, the singer attended a lavish party in Lucknow with her friends and family at a Five star hotel after coming from London. The party which was hosted by a popular interior designer, saw the presence of several bureaucrats, politicians and socialites, as per reports. She reportedly stayed in a sprawling apartment in Lucknow.

The 41 year old is currently getting treatment in the Sanjay Gandhi post graduate institute of Medical sciences. All the Coronavirus patients who have tested positive are being tested again every 48 hours. This was the fifth time, the actress was tested and her results showed positive. The doctors who treated her has said that her health is stable and there is no cause of worry.

Going off to bed. Sending you all loving vibes. Stay safe you guys ❤ Thank you for your concern but I am not in the ICU. I am fine. I hope my next test is negative. Waiting to go home to my kids and family 🤗❤ miss them!

However users of Twitter are spewing hatred at the actress and blaming her for being irresponsible before getting admitted. They also slammed the authorities for repeatedly testing the singer. Check out some of their reactions below :

When we say TEST MORE, we don’t mean only for #KanikaKapoor

Just because this voiceless migrant worker's caste and class didn't match to the #KanikaKapoor, they forced to take bath before to enter in #UttarPradesh #COVID2019 #lockdown pic.twitter.com/Gz6IdbAT8I

Comment your views on these reactions against the Singer !!