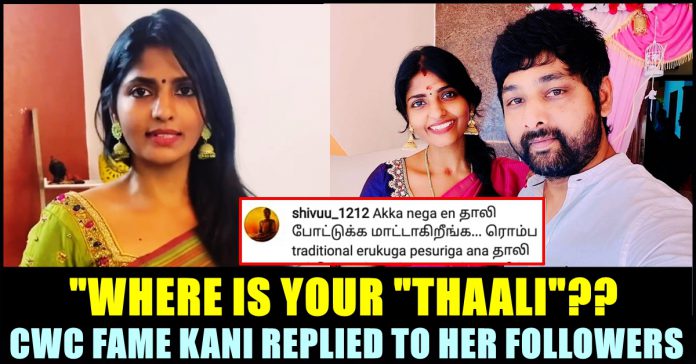 “Cooku with Comali” fame Kani who got married to director Thiru of “Theeratha Vilayattu Pillai” and “Samar” fame, reacted to the comments surfaced in her recent social media posts. Many of her followers questioned about the CWC participant not wearing her Mangal Sutra while posing for pictures or shooting for videos for her social media posts. Through a recent live interaction, Kani expressed her belief about “Thaali” and cleared air for the first time.

It all started when Kani uploaded a promotional video in her official Instagram account for a fashion designing firm. In the video, Kani could be seen wearing a beautiful saree and an appealing blouse. Most of her 7 lakh plus Instagram followers who watched the video questioned on why she is not wearing her “Thaali”. Watch the video below :

Check out some of the comments the video received below :

Kani reacted to these comments through her a live session. “I uploaded a video by wearing a saree right. Many of those who commented on that post questioned about one thing. Many others are asking the same question in my cooking videos and youtube videos as well. It is about why I am not wearing a “Thaali” and some even said that I follow all the traditions and why avoiding “Thaali”. Wearing a “Thaali” is something that is not linked with Tamil culture” Kani said while answering to the comments.

“I believe that the tradition of wearing a “Thaali” is a tradition that was forced into our culture. I strongly believe that the legacy of Tamils is to change garlands with each other in front of people whom we respect. But I got married by wearing a “Thaali”. I love that. It was an identity, right ? It is an event. What happened next is, in another event that took place after three months, they removed the “Thaali” tied by my husband and my relatives tied a new one” Kani further said.

“I lost interest in my “Thaali” right after my relatives tied it to me. I don’t know about you all but I am keeping the “Thaali” that was tied by my husband till now as it is my life. “Thaali” is not a measurement to judge a person’s character and her marriage life. I loved my husband for 8 years and living with him as a wife for 12 years. We are leading a happy life with two children for the past 20 years. Apart from these, I thought that I didn’t need a separate identity to prove my marriage” She could be seen saying in the video.

“I could have easily make videos wearing a Thaali and remove it after shooting the video. But I wanted to let you all know about my stance about this matter. This is the answer to everyone who commented and to those who are going to comment in the future” Kani concluded.