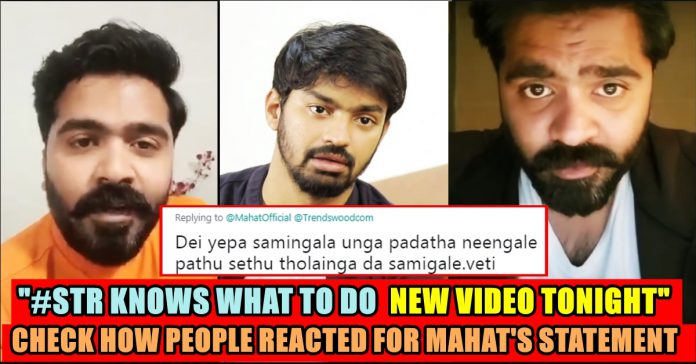 Mahat, one of the dear friend of actor Simbu came up with a furious statement regarding the recent two sensational video of Simbu. In the two videos which are released in the past 10 days, Simbu aka STR seen interacting with his fans.

In the first video Simbu requested his fans not to waste money on buying black tickets. He also asked them not to spend money and energy on celebrations such as raising cut outs, flex on the release day of his Vantha Raajava Thaan Varuven. “Instead buy a saree for your mother, shirt for your father and atleast chocolate for your sister. I want you to post the video on social media which will be the biggest happiness for me”  said the actor in the video.

A week later, the actor released another video in which he said the absolute contrast. He wanted every of his fans to celebrate the movie “Vantha Rajava Thaan varuven” like never before. He reasons that everyone criticized his fan base which made him to do the video.

“As everyone says I do have only 2 or 3 fans which won’t make much impact if they do such cut out, flex, milk celebrations. So my lovable request to all my 2,3 fans is to celebrate it like never before.” says the actor in the video.

This contradiction received severe trolls from the online users. Many created memes and criticized Simbu for taking his fans for granted. Apart from trolls, hatred spread among common audience on seeing Simbu’s attitude in the second video. Even actors like Harish kalyan, mahat Raghavendra supported STR’s activity only to get trolled by their own followers.

In a recent post of Mahat he said that Simbu is going to release another video tonight. In his tweet he said “Hate mongers should understand that a person doesn’t contradict statements without a reason & #STR didn’t contradict but played the mind game well. And tonight we will witness a #NewAgeAapu from STR for the haters. #STRknowsWhatToDo ! Thanks for the negativity 😁✌🏻”

Hate mongers should understand that a person doesn’t contradict statements without a reason & #STR didn’t contradict but played the mind game well. And tonight we will witness a #NewAgeAapu from STR for the haters. #STRknowsWhatToDo ! Thanks for the negativity 😁✌🏻 pic.twitter.com/CAoVK0xPPf

This tweet made the common audience to troll more. Check out the reactions it is receiving now :

Mahat plz don’t give any ideas to STR! Let him do what he wants to! I think he will be much better with out influence @qmeera_

What do you expect from Simbu tonight ?? Comment your views !!