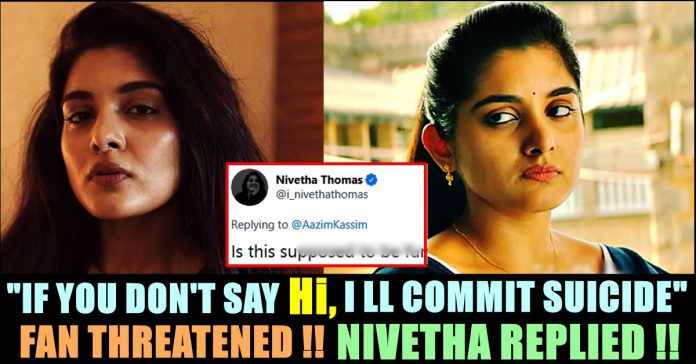 Since the demise of actor Sushant Singh rajput, awareness campaigns against suicide attempts is widely being conducted by people and influential personalities in social media to prevent people from taking such extreme step while being alone or while going through depression.

Please do not retweet.

Many celebrities including actor Vennila Kishore, Esha Rebba and Nivetha Thomas happened to share the tweet in their twitter timeline to make their followers aware due to the request made by their colleagues. When Nivetha Thomas who is known among Tamil audience for her appearance in Darbar, Jilla and many films shared the tweet, one of her threatened the actress to send “Hi” msg and said that he will kill himself if she fails to do so.

“If U say a Hi, to me I won’t Suicide” said the user through his reply tweet whose twitter handle name read as “Kassin Azim”. Nivetha who got highly disappointed on seeing such response for her tweet, said to his that it is not at all funny. She asked him not to post such insensitive statements ever again. The actress also slammed those who cheered his comment. “Apologise to yourself & delete your tweet for good. Take care.” her reply read. Read : “Will You Marry Me?” Asked Follower To Nivetha Thomas !! Here’s Her Reply !!

Is this supposed to be funny? It is not!
What you said here is wrong and I urge you not to utter insensitive, stupid statements like this ever again.

And to the ones cheering on, pls don’t be mindless fools.
Apologise to yourself & delete your tweet for good.
Take care.

Nivetha captured the screenshot of the same and shared it her Instagram story as well. In Instagram, Nivetha asked why they are so obsessed with a reply of a celebrity. She wondered how people are stooping such low to get “Hi” and said to the user that he is not going to get the desired response from her.

Nivetha Thomas who initially rose to fame among the TV audience of Tamilnadu through “My Dear Bhootham”, a mystery serial, has achieved the milestone of acting with both Rajinikanth and Kamal Haasan in Darbar and Paapanasam respectively. It is also notable that she played the role of actor Vijay’s sister in the movie “Jilla”.

Comment your views on this lesson provided by Nivetha to the social media users !!