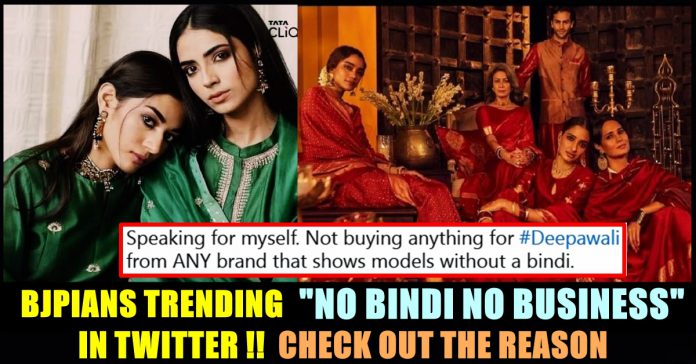 For bringing out a Diwali-themed advertisement for a range of clothing and for naming it as “Jashn-e-Riwaaz”, Clothing brand Fab India has became a subject to severe online backlash. It all started after BJP leader Tesjaswi Surya called out the brand for deliberate attempt of Abrahamisation of Hindu festivals. The main reason behind the online flak Fab India received is due to the models of the brank not being portrayed in “Hindu traditional clothes”. Followed by the number of reactions, a social media trend claiming “No Bindi No Business” surfaced in Twitter.

On 9th of October, Fab India tweeted about their campaign for the Diwali collection with a post and wrote “As we welcome the festival of love and light, Jashn-e-Riwaaz, by FabIndia is a collection that beautifully pays homage to Indian culture…” as their caption. The picture they uploaded featured men and women flaunting beautiful garments in vibrant shades of red, maroon and gold. As soon as witnessing about the backlash, the firm deleted their tweet but the screen shot is still trending in social media platforms.

“Deepavali is not Jash-e-Riwaaz. This deliberate attempt of abrahamisation of Hindu festivals, depicting models without traditional Hindu attires, must be called out. And brands like @FabindiaNews must face economic costs for such deliberate misadventures” Tejaswi Suriya said in his tweet to condemn Fab India.

This deliberate attempt of abrahamisation of Hindu festivals, depicting models without traditional Hindu attires, must be called out.

And brands like @FabindiaNews must face economic costs for such deliberate misadventures. https://t.co/uCmEBpGqsc

“Speaking for myself. Not buying anything for #Deepawali from ANY brand that shows models without a bindi. #NoBindiNoBusiness” Author Shefali Vaidya who is one of the main reasons for the campaign to start, tweeted.

Speaking for myself. Not buying anything for #Deepawali from ANY brand that shows models without a bindi. #NoBindiNoBusiness

Many others took part in the twitter trending and came up with posts, pointing out the importance of wearing Bindi and some uploaded their own pictures donning Bindi.

💯 percent with u on this. If anyone wants our bucks make sure they are one among us. #NoBindiNoBusiness https://t.co/NbwskHK94Q

No Bindi No Business!!

Let do not buy anything from those brands who are either mocking our Islamization our Festivals.#NoBindiNoBusiness https://t.co/fkoXoT9IJE

Dear @FabindiaNews and @TataCLiQ, see, these models are SMILING, they have a Bindi, they are carrying a Pooja Thali with Diyas. THIS is how you depict the joy, festivities and significance of #Deepawali #NoBindiNoBusiness pic.twitter.com/M19fGbQQo4

Reactions countering the sentiment were also surfaced. Have a look at them below :

Most of the time I don't wear a bindi, and when I do, I wear it because I like it so all those preaching on Twitter that there should be bindi on a woman's forehead as it's mandatory in our religion can go to hell.

Not wearing bindi won't make me any less hindu or Indian!

No one’s got the effing right to tell me or any woman why and when and where and how and if we need to sport a bindi or not ! pic.twitter.com/uUbyEJbvaL

I genuinely wonder how far the Sanghi outrage arms race will go. Each one more unhinged and venomous than the next. And it has to get progressively more unhinged or they won't get traction. Terrifying. pic.twitter.com/7kJfh9yUyy

These high foreheads did not need to wear a Bindi to please some pervs..
(Shivrani Devi,Amrita Pritam, Mahadevi Verma and Shivani) https://t.co/gHYczmNh1o pic.twitter.com/J50lJu35gu

The online outrage reminds us about the last year’s Tanishq jewellery ad which was forced to take as it contained a concept of Hindu women getting married into a Muslim family which organised a traditional Hindu baby showed function for her. Comment your views on this “Bindi” debate !!