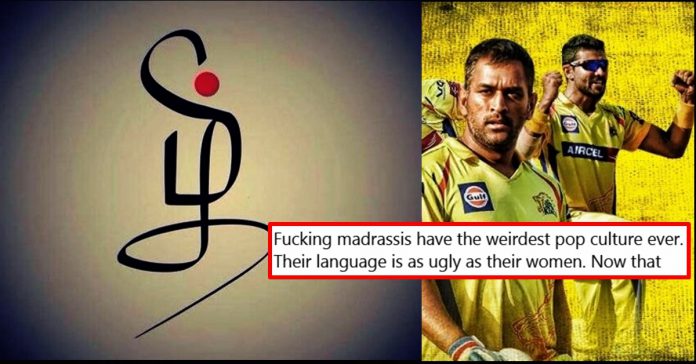 Chennai Super Kings team is one of the most loved franchise in Indian Premiere League tournament. The team not only loved by the fans who belong to Tamilnadu but also by the fans across the world. The reason behind it is nothing but the captain who leads the team since the inaugural season of IPL.

After serving a two-year suspension from the IPL starting July 2015 for the alleged involvement of their owners in the 2013 IPL betting case (along with Rajasthan Royals), the Super Kings returned to the league in 2018, winning the championship in the comeback season, its third overall to tie Mumbai Indians for the record for most IPL title wins. In the last season, the team went to finals and lost to Mumbai Indians by not able to score 149 runs in 20 overs.

Super Birthday to the man who knew T20 even before T20 knew itself! 🦁💛 #Chepauk319 #BeginningOfWhistles #WhistlePodu pic.twitter.com/UmcrAYemB5

To this post, one of an online user who seems to be a guy from North India abused Chennai and the language of its people speak. “Fucking madrassis have the weirdest pop culture ever. Their language is as ugly as their women. Now that Kashmir is in, we gotta start carving this monkey land our of India” he wrote.

Fucking madrassis have the weirdest pop culture ever. Their language is as ugly as their women. Now that Kashmir is in, we gotta start carving this monkey land our of India

To this tweet, Chennai Super Kings, trolled back the user in its own way. They posted three Thirukurals to give their piece of mind to the abuse. The first Thirukural CSK posted, said that “Karma is a Boomerang” and the second one asked the user to watch his words before letting it out. The third one said that the one who tolerates the abuser is the head of all.

It is one way to teach the abuser, a lesson !! Comment the other ways you know !!