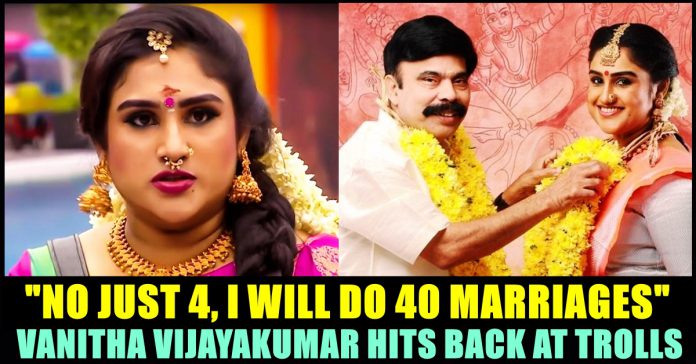 Revealing the fact about the viral marriage picture of herself and actor power star Sreenivasan, actress Vanitha Vijayakumar, interacted with press reporters and expressed her displeasure over how society is making a ruckus over a woman getting into a new relationship after failing in one. She said that the same society is not questioning the men who gets involved in a series of relationships and went on to make a bold statement saying that she will get married, not 4 times, but even 40 times, to live her life to the fullest.

On Wednesday, Vanitha Vijayakumar came up with a post in her official twitter and Instagram handle which showed herself and Power star Sreenivasan donning bride and groom attire respectively. Power star could be seen holding the garland of Vanitha and the post suggested that they are getting married. Tagging Power star, Vanitha added heart emojis as her caption for the post. After the wide reach the post garnered, the actress, on Friday, made it public that it is about one of her upcoming films named “Pick up Drop”

Vanitha Vijayakumar started her acting career in the year 1995 through a film named as “Chandralekha” in which she paired opposite to actor Vijay. Vanitha’s personal life had always been under the scanner of media and public. After a number of failed relationships, the actress recently got married to a man named Peter Paul and broke her relationship with him due to his habit of excessive alcohol consumption.

“I humbly request media not to make such portrayals about the lives of women. We should have the freedom to make personal choices. When men do, no one is looking at it in a wrong way. No one is counting the number of marriages men do as fourth or fifth or sixth. But when a woman do it, it is being wrongly portrayed, even if I do it publicly in a honest way.” Vanitha Vijayakumar said.

“Media could eb little more supportive. Nothing wrong in women making choices about their partners. There are many chauvinists in the place. It becomes one of the causes for the suicide of women. I don’t even worry about it. Not 4, I even do 40 marriages, It is my choice and my life. I have the courage to do it. I can face it and I will live my life to the fullest. I don’t fear for anyone and I will do it publicly with all your knowledge” Vanitha concluded.