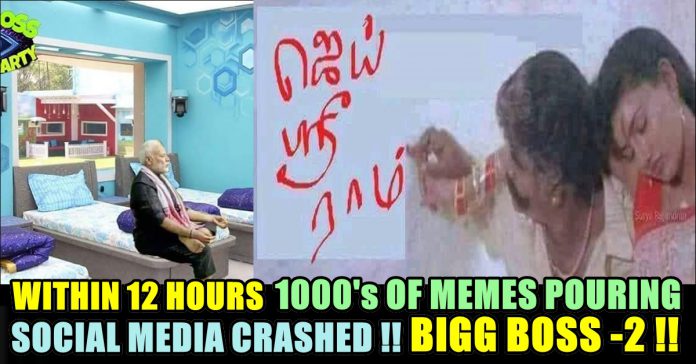 Several cameras, 15 contestants and one Kamal Haasan. They are back. Probably the biggest show on Tamil television, Bigg Boss Tamil is back with its second season.

With Kamal now donning his politician avatar, the reality show will see more eyes glued to their sets. Starting June 17, the show will be aired every day at 9 pm. Although the first season was full of controversies but that doesn’t mean the show was any less entertaining. Bigg Boss Tamil had successfully shot up on TRP charts with the highest ratings. This second season further has an added advantage with Kamal Haasan taking the center stage not just as the host but also a politician. He’ll get a bigger platform to spread his message and use this to his benefit. Now it’s left to see how will he turn the tables around. Within 12 hours of the launch of the show , the memes about Bigg Boss are pouring in the social media platforms. And they are hilarious to the core. Here are some of the best memes that got surfaced in the internet :

How do I tell you 😂😂🙊#BiggBossTamil2 pic.twitter.com/XoCumkE4TC

Oh my god the female contestants are so insecure because of Oviya 😂 #BiggBossTamil2 . Everyone where like 😂#oviyaarmy pic.twitter.com/tuRLB4a6tr Now what do you think of these hilarious memes ?? comment if you have some !!