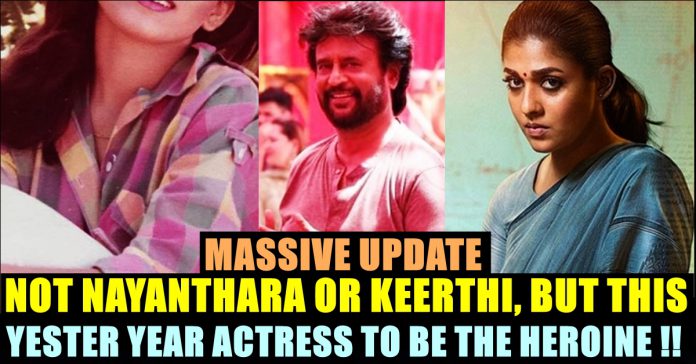 Superstar who was last seen in Karthick Subbaraj’s “Petta”, is next to be seen in A.R Murugadoss’s “Darbar”. The film which is in its final stage of shooting, has Lady Superstar Nayanthara in the female lead. While every fan of the actor are expecting the production house to announce about who the heroine will be, a buzz has been surfaced about the detail.

The film which is tentatively titled as “Thalaivar 168” is going to be directed by “Viswasam” fame Siva. It was earlier rumoured that the director met the actor a couple of times in his resident. Siruthai Siva was also invited to Rajinikanth’s house to attend Golu during Navarathri. Sun Pictures, the production house which produced Rajinikanth’s Petta is going to fund money for this project as well. Music of the film is going to be composed by D. Imman who did music for Siva’s previous venture “Viswasam”

Now everyone are expecting the makers of the movie to choose a heroine of current trend, Siruthai Siva and Co chose actress Kushboo to play the lead in it seems. According to the reports, the actress who paired with Rajinikanth in movies like Annamalai, Mannan is going to act with the Superstar again.

#GalattaBreaking #Khushbu is the front-runner to play the female lead in #Thalaivar168 directed by #Siva and produced by #SunPictures. In final stages of talks!

Meanwhile, the production house has officially updated that comedian Soori has been roped in to play one of a role in the movie. It is notable that Soori is going to act along with the Superstar for the first time in his career.

Director Siva is known for his commercial blockbusters such as Siruthai, Veeram, Viswasam etc. Fans are expecting for a “Padayappa” kind of commercial film from this combination which is evident in social media.

Thalaivar 168, according to sources, is touted to be a commercial venture, set in a rural backdrop. The pre-production work is currently underway and the film might go on floors next year.

If reports are to be believed, Superstar Rajinikanth will see two releases in next year as “Darbar” is planned to release on Pongal and Thalaivar 168 to hit the screens on Diwali day.

What do you think on Khushboo playing opposite to Rajinikanth as lead ?? Comment your views below !!