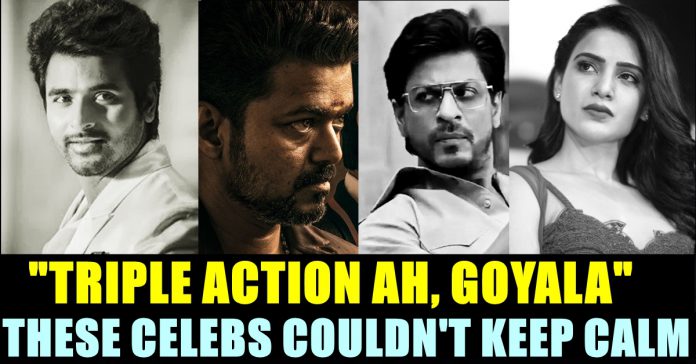 No words could describe the craze level that is being created by Bigil Trailer. Director Atlee, who himself a biggest fan of actor Vijay, carved the actor inch by inch it seems. The most awaited trailer of Bigil released and left the Internet in explosion. The film which marks the third collaboration of Atlee and Vijay, has actor Vijay in the lead in three different get ups.

Produced by AGS Entertainments, Bigil has Nayanthara as lead lady. Kathir, Vivek, Yogi Babu, Indhuja Ravichander, Jackie Sheroff, Daniel Balaji are some of the other actors taking part in the film.

The trailer ticks all the boxes of the expectation list of a Vijay fan. Looking like a emotional action drama, Bigil trailer promises an absolute treat for the fan who are waiting for it since past one long year. The director revealed the character names of the three characters in the trailer and made the references of his previous movies as well.

As soon as the video released it reached more than 1 million likes. Not only fans, many celebrities including few who belong to bollywood cinema are celebrating the trailer. Check out some of their reactions below :

What an incredible trailer 🔥🔥🔥 https://t.co/EXz3nBurej

Have you watched the trailer ?? Comment your views on it !!