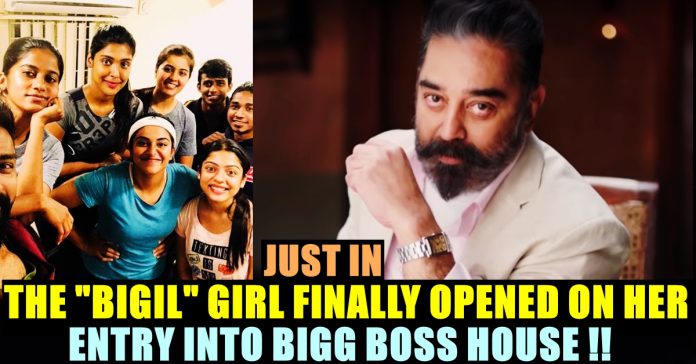 After Sunaina, Sanam shetty and few other models, one more actress denied entering the BIGG BOSS house. Fans who were very much confident about the actress’s entry, got upset of seeing the denial from her as they wanted her to enter the house so badly.

Big Boss 4 is all set to stream from the first week of October month and the makers of it are busy producing promotional videos for it by having actor Kamal Haasan as the main man. Speculations on the 14 participants are doing rounds in social media platforms. So far, it is highly believed that actress Kiran and “Ispade Rajavum Idhayaraaniyum” fame Shilpa Manjunath are participating the show as two among the 14 contestants.

On seeing this, many fans of her who fondly call her as “Thendral” ot excited and started sharing the news. Now, in a way of putting full stop to all such happiness, Amritha posted story in her official Instagram account saying that she is not going to take part in the show.

Amritha who is known among Tamil audience for her stint in Vijay’s “Bigil”, denied her entry by writing “I really want to put an end to the rumours! I am not going in to the Bigg Boss show guys !! Thank You” she wrote in her story.

Sanam Shetty denied the news by writing “no it’s just a rumour👍 I’m not going.” in one of her Instagram posts.

Comment your views on Amritha denying her Bigg Boss participation !!