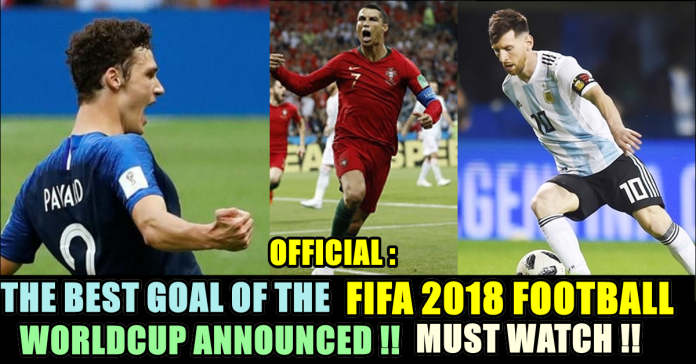 France right-back Benjamin Pavard has won the 2018 World Cup goal of the tournament award for his stunning strike against Argentina, FIFA announced today.

The 22-year-old Stuttgart defender ran onto a left-wing cross from Lucas Hernandez and sent a right-footed half-volley spinning into the top corner to level eventual champions France’s last-16 tie with Argentina at 2-2 in the 57th minute. France went on to win the game 4-3 before beating Croatia in the final on July 15.

Pavard’s effort won a public vote to be named the best of the 169 goals scored in the tournament, seeing off competition from Colombian midfielder Juan Quintero’s free-kick against Japan and Luka Modric’s goal in Croatia’s group-stage thumping of Argentina.

Earlier, World Champions France’s key player Kylian Mbappe revealed that he had played the tournament’s semi-final and final with a back injury. In an interview with France Football magazine, Mbappe says he displaced three vertebrae in his back during the tournament in Russia three days before France defeated Belgium 1-0 in the semifinals.

France won the World Cup with a 4-2 victory over Croatia in the final. “It was essential not to alert our opponents, otherwise they could have taken advantage of that and targeted this sensitive area,” said Mbappe, who scored four goals in the tournament including one in the final.

“That’s the reason why with the staff and the players we kept it hidden, even for the final.” The 19-year-old Mbappe was one of the stars of the tournament and picked up the award for the best young player at the World Cup. Mbappe, who plays for Paris Saint-Germain in the French league, also told the magazine he hopes he can be a contender for the Golden Ball award alongside his PSG teammate Neymar, Cristiano Ronaldo, Luka Modric and Real Madrid defender Raphael Varane.

Do you think the goal deserved to be the best goal of the season?? Comment below !!