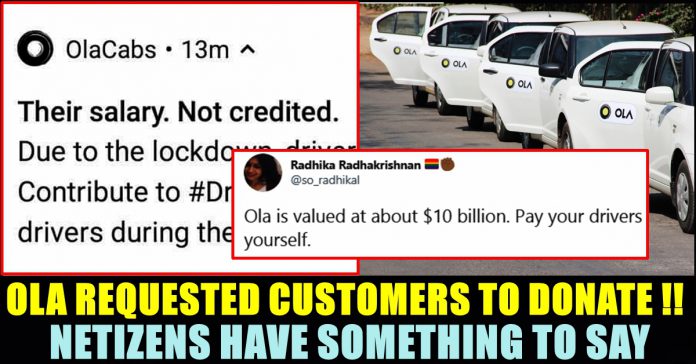 This corona outbreak has turned the world upside down indeed. As government has suggested every place which requires public gatherings to get closed, workers who are working for daily wages are getting suffered in big time along with the world’s economy. As many people came forward to donate to PM Cares and CM fund relief, to help them combat the deadly Coronavirus which is being a threat to the whole country, people who are making a life out of driving, shop keeping, construction works are suffering a lot in this lockdown situation.

Reliance industry announced a donation of Rs.500 crores to the PM Cares. Engineering & construction giant Larsen & Toubro accepted to donate Rs.150 crores to the relief fund. Board of Control for cricket in India announced Rs.51 crores and several other sports and cinema personalities came forward to donate their part for PM Cares. Meanwhile, OLA, a popular riding app has came up with an initiative to help its drivers who are financially struggling at this situation.

Named the initiation as “Drive The Driver Fund”, Bhavish Agarwal, OLA’s chief executive and co-founder donated Rs.20 Crore, his annual salary to the initiative by the ride hailing app. “Millions of drivers & their families find themselves without an income today. To support them, we are launching the ‘Drive the Driver’ fund. I’m contributing my next year salary and Ola along with employees will contribute ₹20 cr to the fund.” he wrote in his tweet.

Millions of drivers & their families find themselves without an income today. To support them, we are launching the ‘Drive the Driver’ fund. I'm contributing my next year salary and Ola along with employees will contribute ₹20 cr to the fund. https://t.co/bR561tZ7Es 1/2 pic.twitter.com/KUZiOxWaFl

Since the initiation, users of the app are receiving notifications in their phones. Though many are willing to donate the drivers, many asked the company to take care of its employees. This instigated a debate in the micro blogging site. Here’s the some of the mixed reactions from the Twitter users for the notifications they are receiving in Twitter :

Ola is valued at about $10 billion. Pay your drivers yourself. pic.twitter.com/NOz4yFSNoS

I've seen @Ola @Rapido had sent text as there Drivers are Idle and not earning due to lockdown and asking for Donations.

This is sick. Ola Uber Rapido have earned millions and they have Data of their Regular Pilots. Pay from you earned these years instead of begging.

@ola_supports @bhash @narendramodi At the time when country is going through such a crisis. OLA is trying to loot people..They always do normally too..Asking for donations and giving loan to drivers, so basically it goes in their acount..Ola should be ashamed

If I remember well, Ola CEO had donated RS 100 Cr to PM’s StartUp India campaign. I was wondering then that how do they manage to give such huge donations with negative earnings.

And now I am wondering, why can’t they donate a similar 100 Cr to their needy drivers?@bhash https://t.co/9bnoxaFLif

Everyone doing the PM way 😂 https://t.co/1cSWFZBlzk

Comment your views on this initiative and these reactions !!