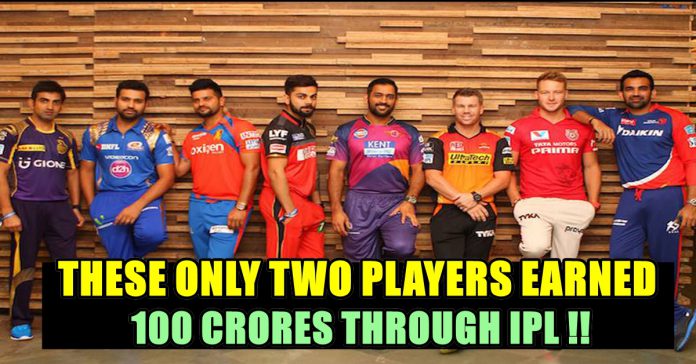 The Indian Premier League (IPL) remains to be one of the biggest extravaganzas in the country. From the auction to the final day of the tournament, the excitement quotient only escalates. The current season was an absolute crackerjack as most of the matches turned out to be nail-biters. The viewership of the event skyrocketed with the progression of the contests.

The Final between the Chennai Super Kings (CSK) and the Sunrisers Hyderabad (SRH) fetched over 10 million viewers on Hotstar, which was a massive achievement. IPL saw the daylight back in 2008 and ever since several cricketers crave to play in the cash-rich league. Players from around the globe earn hefty from the championship. The IPL franchises, till date, have signed 694 players over 11 years and they are phenomenal numbers compared to any T20 tournaments around the globe. There are also a couple of cricketers who entered the INR 100 crore club in terms of salaries earned since they started playing- MS Dhoni and Rohit Sharma are the names. The CSK skipper is the highest earning IPL player with a salary of 107.8 crores as per reports in Insidesport. The veteran earned 6 crores in 2008 and currently earns 15 crore, which is 150 percent more than what he garnered in the inaugural season. Dhoni played eight consecutive seasons for CSK before moving to the Rising Pune Supergiant for the next two seasons. Meanwhile, Chennai served a two year suspension period owing to involvement in match-fixing scandals. Nevertheless, he came back and took over the reins of the Yellow Army and led the side with sheer authority. Most importantly, he won CSK their third title and also turned out to be a brute force with the willow in hand. Rohit has notched a whopping INR 101.6 crores thus far. He started his IPL career for the Deccan Chargers with a salary of 3 crores and currently plays for the Mumbai Indians (MI). He was retained by the Reliance group-owned Mumbai team for INR 15 crores in this season’s IPL. He helped Mumbai to three title glories in 2013, 2015 and 2015 respectively.