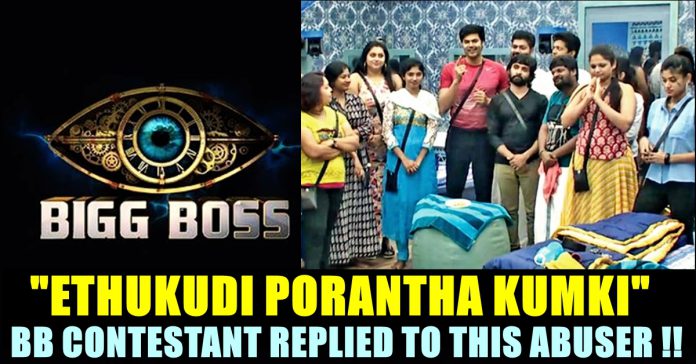 Comedy actress Aarthi aka Harathi rose to fame among Tamil audience through films such as “Padikathavan”, “Kutti” etc. She is one of the prominent contestant of Bigg Boss season 1 hosted by Ulaganayagan Kamal Haasan.

Harathi is also recognised for her social media existence and she represents herself as a “Thala” Ajithkumar fan. Being so interactive with her followers in Twitter, Harathi never shied away to reply for trolls and abuses as well.The actress who celebrated her 29th birthday on the 9th of November, replied to almost everyone who wished her for her birthday.

Meanwhile she even replied to a twitter user whose twitter name is “Thalapathy”. The guy body shamed the actress and questioned why she was even born. “Neelam ethukkudi porantha kumki” read the tweet of the twitter user.

On seeing this tweet from 2017, Harathi decided to reply back to him now in her own way. As the handle name of Thalapathy is “420kedi” Harathi in her reply said “Ungalamadri 420kediya adakathaan 😊🙏”

Aarthi began her career as a child artiste in films including Vanna Kanavugal, Chatriyan , Anjali and so on before taking a break from films and attending Meenakshi College for Women. She then got a breakthrough as a comedian through the stand up comedy show, Asatha Povathu Yaaru? Her performances on the show fetched her film offers, with Aarthi often playing overweight characters in Tamil films during the 2000s. Some of her popular early films included Arul, Giri and Kundakka Mandakka, in which she collaborated with actor Vadivelu.

On seeing this reply from Harathi many of her followers lauded her and encouraged her to shut such trolls in even more harsh way. Check out some of their replies :

Plz don't even reply to such idiots sister. Those who don't respect other human beings are not human, they are evils.

In 2017, Harathi took part in the Tamil reality television show, Bigg Boss hosted by Kamal Haasan. She was evicted from the show on day 21, but later returned for a fortnight as a guest contestant. Harathi married her fellow comedian Ganeshkar in a ceremony in Guruvayoor during October 2009. The pair had earlier been dance partners during the reality dance show, Maanada Mayilada.