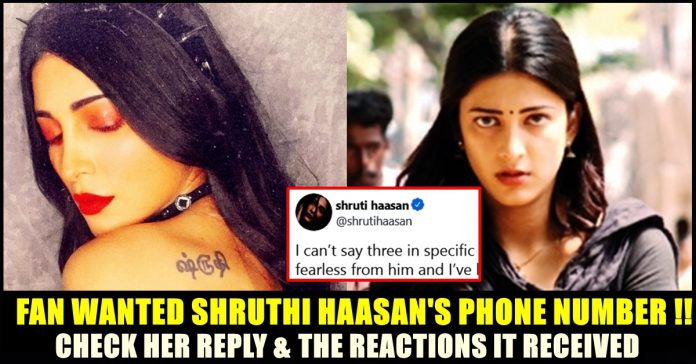 Shruti Haasan became a victim of online trolls after replying to a fan who asked her to provide her phone number during her question and answer session. The actress gave him the number of Police station and many felt that the joke or whatever Shruti tried got outdated and started trolling her. The actress answered to many other questions of her followers but none garnered the reach her phone number tweet attained.

Being a daughter of India’s popular iconic celebrity, Shruti Haasan earned herself a name through sheer hard work. She happens to be one of the most active celebrities in social media platforms as well. Having more than 1 crore and fifty lakh followers in Instagram and 70 lakh followers in Twitter, Shruti never missed to engage her followers by uploading pictures from her photo shoots and by conducting chat sessions with them frequently.

After appearing in couple of her father’s films as a child artist, Shruthi Haasan made her Tamil debut as heroine 7 aam arivu and continued to act in films like 3 with Dhanush and Vedhalam with Ajith Kumar. She is also acting in other language films, mainly in Telugu. On Monday, after Face book, Instagram and Whatsapp faced global outage, the actress logged in her Twitter account and conducted a chat session with her 7.8 million followers.

Among the many who questioned her, a follower came up with a tweet asking her Phone number and Shruthi replied to him writing “100”

Many of her followers who saw her reply, felt that these kind of replies got outdated and trolled the actress. “Why r u in police station??” asked a follower whereas another one said “

On the work front, Shruthi Haasan was last seen in “Laabam” which was directed by late filmmaker SP Jananathan. She paired up with Vijay Sethupathi for the first time through the film. She who did an extended cameo in Pawan Kalyaan’s “Vakkeel Saab” is going be seen in “Salaar” of Prabhas as well. Check out some of the other answers she provided for her fans below :

I can’t say three in specific like that but I’ve learned to be fearless from him and I’ve learned that humour will take you through life in the best way possible https://t.co/oWjFskfcZO

The privilege of living another life and honouring imagination https://t.co/UdSuxGZU64