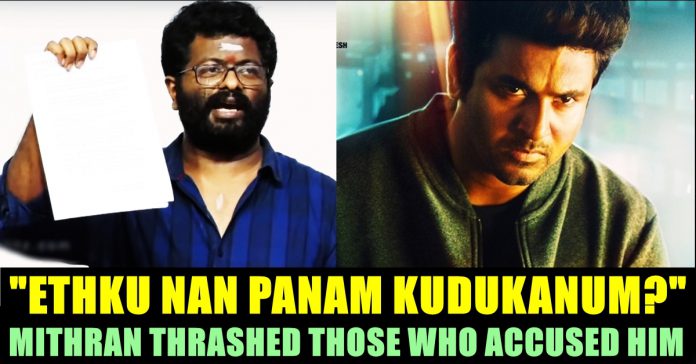 South Indian Writers Union leader K.Bhagyaraj declared that the story of recently released film “Hero” is similar to the story of Atlee’s assistant director Bosco Prabhu. A letter was released to media regarding that yesterday which made the director of “Hero” P.S Mithran to give clarification by conducting a press meet.

“All of them stated that both of your stories are similar. *A Fraud hero – A sister who involved in research- A Villain who betrays her in the name of getting her the copyrights for her product- Sister’s Arrest- returning through train after release- Suicide- A reformed hero – Avenging the villain* are similar in both the stories” said the ace writer and filmmaker K. Bhagyaraj. (Also Read : “Hero” Makers In Big Trouble For Stealing Story From Assistant Director !!)

Now in a way of giving clarification to the fans and media, P.S Mithran has said that he has no link with Posco Prabhu to steal the story. “Just because he thought of a story similar to mine, why should I pay money to him ??” asked Mithran in the press meet.

“Today (Yesterday) a letter from writers union has been provided to press regarding the story issue. I thought of registering my opinion on the same which is the reason for this press release. They called me for a meeting in writers union by saying that my synopsis and Bosco Prabhu’s story synopsis looks same. They asked me to pay certain money to Prabhu for the similarities in both the stories. I asked them why should I pay him just because he thought of something similar to me” said Mithran in the press meet.

Mithran further said that the members of writers union denied to read the entire screenplay of my story. “They said that the synopsis is enough for them to make a conclusion.” said Mithran who added that they are not reading the entire story till now.

“Till now writers union didn’t tell me that my story is a theft one directly to me. But when it led to an issue, they are labelling it as a theft story which is worrying me a lot.” the director said. The director informed the press that they worked for 446 days in the pre production of this film. “We have a record for the entire audio conversations during the pre production process. We have the documents to prove it because it it like a bible to me.” added Mithran who said that he is not a sole writer of the film. “I have writers and you could see my name in the credits only for direction in any form of promotional material” he said.

Sivakarthikeyan’s “Hero” movie released across the world on December 20. The film directed by “Irumbuthirai” fame P.S Mithran talks about the flaw in the educational system of India. Added with commercial elements, the film conveys a message to the students and parents of current generation.

What do you think on the clarification provided by the filmmaker ?? Comment your views below !!